After their Capital One Cup hangover, Bradford have stepped up their play-off challenge and are now well on track to reach the top seven, thanks to only one defeat in the last ten matches.

This was a hard fought game against third-placed Northampton Town, but one that the Bantams never looked like losing, in fact they could have made it much easier if they had taken more of their chances.

Bradford City started the stronger of the two sides with shots from Gary Jones, Kyel Reid and Andrew Davies all going close in the first 15 minutes.  However it was Nahki Wells who scored the only goal of the game on 23 minutes.

A long ball out of defence by Gary Thompson lead to a defensive mix-up between Cobblers defender Nathan Cameron and his goalkeeper Lee Nicholls.

Cameron tried to head the long ball back to Nicholls, but he was unaware the keeper had come out of his area to claim the ball, which Cameron headed past him to leave Wells clear on goal, to score from one yard into an empty net.

On thirty-four minutes City could have extended their lead when Gary Jones floated a cross over to James Hanson at the far post, the giant striker in turn nodded the ball back across the area for the waiting Thompson, who sent a looping header towards goal which Nicholls in the Northampton goal had to turn over the bar.

Bradford started the second half in the same manner as the first, on forty-seven minutes following a neat one-two with Wells, Kyel Reid forced Nicholls into a smart save with a fierce low drive from just inside Northampton’s penalty area.

This was followed by two efforts in two minutes, Kyel Reid crossed into the area for james Hanson to head the ball down for Nahki Wells to drill a low effort back across goal on fifty-two minutes.  Just a minute later Gary Thompson hit a half-volley from the edge of the area that went narrowly wide of Nicholls near post.

Reid Forces Nicholls into Save

On 74 minutes Jon McLaughlin denied Northampton’s Ben Harding with a world class reaction save.  A long throw into the City area from Ben Tozer wasn’t cleared and Harding shot at goal with a fierce half-volley. McLaughlin dived to his left to make an outstanding one handed save, before John Johnson slices the ball wide on the rebound.

It was Bradford who finished the stronger of the two teams, with further efforts on goal from James Hanson, Kyel Reid and Zavon Hines in the last ten minutes.  The support from the crowd in the final ten minutes was excellent, with the sound of Take Me Home echoing around Valley Parade. 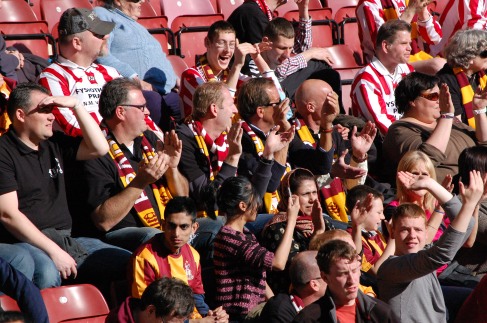 Eighth-placed Bradford are now within two points of the play-offs, with a game in hand on seventh-placed Exeter and Bristol Rovers set to visit the Valley Parade on Tuesday evening.