Comedy night arrived in Bradford on Tuesday evening, when Rotherham manager Steve Evans arrived at Valley Parade with two minders, in fear for his life.  The second act was a ninety minute appearance of referee Mark Haywood who was without doubt a joke.

This was a tough tackling keenly contested Yorkshire derby, with a massive impact at the top end of the league two table; unfortunately for the Bantams the match officials did not live up to the occasion.

Bradford started stronger, when James Hanson headed home a Gary Jones corner after four minutes, only for the referee to disallow the goal for a push on Rotherham’s Claude Davis.

Kieran Agard then led a dangerous Rotherham counter-attack as he sprinted clear down City’s left flank, making his way into the area.  Agard then crossed low for Lee Frecklington in the middle of the area, but his headed effort looped wide.

On twenty-eight minutes, more bad news for Bradford as Andrew Davies had to leave the field due to a calf injury.  He was replaced by the experienced Michael Nelson at centre back as Bradford continued to defend well.

City then had a second goal disallowed, when Garry Thompson was flagged offside after slotting home a Gary Jones cross. 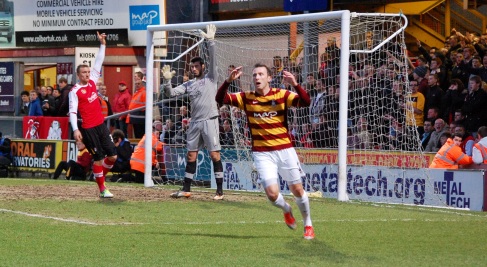 Two minutes later, Jon McLaughlin produced a great save low down to his left to prevent Alex Revell’s downward header creeping in following Ben Pringle’s cross to the far post.

On forty-three minutes, during a break in play, the fourth official Mr Alf Greenwood stepped onto the pitch to speak with referee Mr Mark Haywood.  As a result, City assistant Steve Parkin was sent to the stands for something he seemingly said to the fourth official. 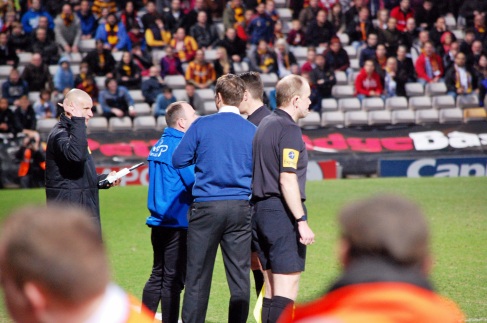 The second half continued in the same vein as the first, with Bradford having a number of shots on goal all from distance through James Hanson, Kyel Reid and Gary Thompson.

With only ten minutes to go, referee Haywood was the only person in Valley Parade to see a handball by Michael Nelson and he awarded Rotherham a spot kick.  Lee Frecklington stepped up and sent McLaughlin in the Bradford goal the wrong way, to give Rotherham a 1-0 lead.

Bradford had one last chance in the ninety second minute when Alan Connell latched onto a James Hanson flick, but the striker could only put his first time effort over the bar from just outside the six yard box. 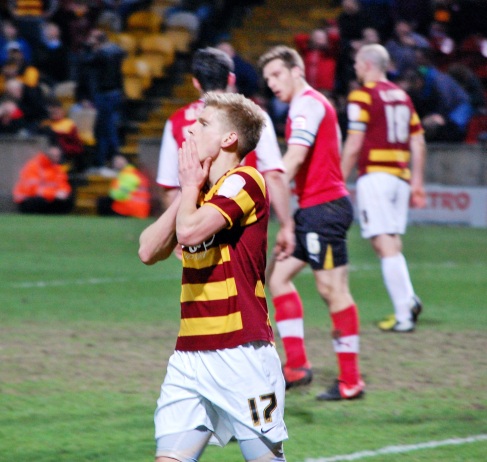 Rotherham then sealed the victory deep into injury time through a breakaway goal finished by Kieran Agard.  With Bradford goalkeeper McLaughlin up for a late corner, Rotherham broke forward with Agard out sprinting McLaughlin to tap into an empty goal.

Bradford City are in the final play-off spot, with only two games of the season remaining, at home to Burton Albion and Cheltenham Town away.