It was a day to remember in the sunshine at Valley Parade, not only because Bradford City secured a place in the league two play-offs, but also because the Coral Windows Stadium fell silent for one minute, as a mark of respect to the anniversary of the Bradford City Fire Disaster.

Both sides had chances in the opening fifteen minutes, with Gary Thompson and Kyel Reid causing the visitors problems down either flank.  It was Thompson on eight minutes, who sent over an inviting low cross into the area, but Nahki Wells was beaten to the ball by Burton goalkeeper Dean Lyness.

Kyel Reid was substituted on nineteen minutes, with what looks like a re-occurrence of his groin injury, which could be the end of Reid’s season.  He was replaced on the left by winger Zavon Hines. 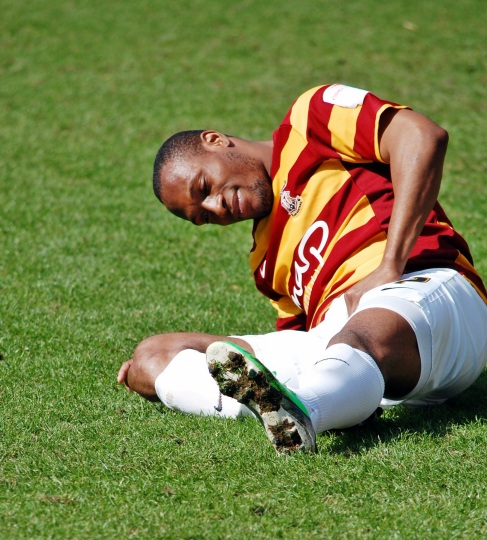 Bradford continued to make chances, the first of which fell to Michael Nelson who headed wide following a Gary Jones corner.  In the second James Hanson headed a yard wide of Dean Lyness far post following a brilliant delivery into the middle by Gary Thompson.

Burton then had a chance on 42 minutes, when Jacques Maghoma cut inside Gary Jones and Stephen Darby before shooting an angled drive from just inside the area, that Jon McLaughlin superbly tipped around his far post. 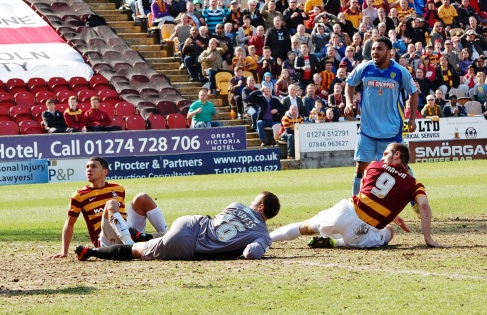 James Hanson gave Bradford the lead on forty-four minutes, a long ball forward from Ricky Ravenhill had Burton’s Marcus Holness nervously racing back towards his own goal.  His weak header back to goalkeeper Dean Lyness was read by Nahki Wells and the Bermudian got a shot on goal.  The Burton keeper, Lyness managed to save Nahki Wells effort, but James Hanson was on hand to loop a shot over Lyness and the recovering Ian Sharps on the line to find the net.

In injury time at the end of the first half, Lee Bell was sent off after elbowing Zavon Hines, whilst the pair went up for a challenge in the air for the ball.

In the second half Bradford made their extra man count and continued to put the pressure on the Burton defence.  Four minutes after the restart, James Hanson went close from outside the area when he drove a shot a yard wide of Lyness post.

Gary Thompson then hit a half-volley from just outside the area on fifty-seven minutes, which was well saved by Dean Lyness in the Burton goal low down to his left.

Six minutes later Michael Nelson’s looping header from a Gary Thompson free-kick was tipped over his bar, by a back-pedalling Lyness.

Then on seventy-nine minutes Burton’s Jack Dyer was stretchered off with an injury, which could rule him out for the rest of the season, he was replaced by former Bradford City player Michael Symes.

Bradford then had three clear cut chances in the final two minutes, the first two fell to Alan Connell who put one shot just wide and the other over the bar.  The third chance fell to Zavon Hines who curled his shot just wide.

Bradford have now confirmed a play-off spot and will play either Rotherham United, Cheltenham Town or Burton Albion in the semi-finals over two legs.  The first leg will take place at Valley Parade on Thursday 2nd May 2013.