Bradford City finished an excellent campaign with their second visit of the season to Wembley, were they secured promotion to NPower League One by thrashing Northampton Town in the League Two play-off final.

City were the better team for the whole 90 minutes and went close on three minutes when Nahki Wells had a 25 yard free kick tipped over the bar, from the resulting corner it was Wells who headed over the bar from 8 yards.

On fifteen minutes James Hanson put Bradford in front with a looping header over Lee Nicholls in the Northampton goal following an excellent cross from Gary Thompson.

Bradford continued to attack and following a short corner, Kyel Reid over hit a cross into the Northampton area, which was collected by Nathan Doyle.  His cross was met at the front post by Rory McArdle who sent a bullet header into the goal to give Bradford a two goal lead.

On twenty-seven minutes, a long throw from Stephen Darby eventually found it’s way to Nahki Wells at the near post, but his effort at goal from a tight angle was blocked by the chest of Lee Nicholls in the Northampton goal.

Bradford then added a third goal, following a Kyel Reid cross, it was Gary Thompson who headed back across the box for Nahki Wells to score from 6 yards.

On thirty- two minutes a Stephen Darby long throw, eventually bounced into the path of Kyel Reid who headed at goal from six yards.  This would have been Bradford’s fourth goal if it was not for an excellent save by Northampton goalkeeper Lee Nicholls who tipped the ball over the bar. 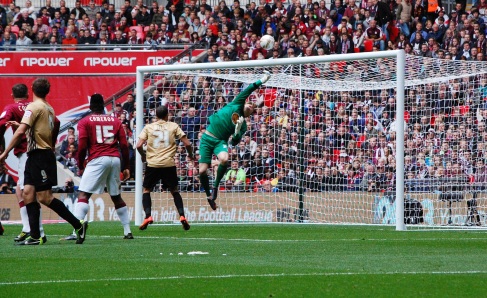 The second half continued in much the same way as the first half with more controlled football through Nathan Doyle and Gary Jones in midfield.  They created more chances for the front two of Nahki Wells and James Hanson.

Bradford City supporters once again showed a touch of class, that should be an example to all clubs in the football league.  On 56 minutes half of Wembley Stadium stood and applauded for one very emotional minute as a mark of respect to the people who lost their lives in the Bradford City fire. 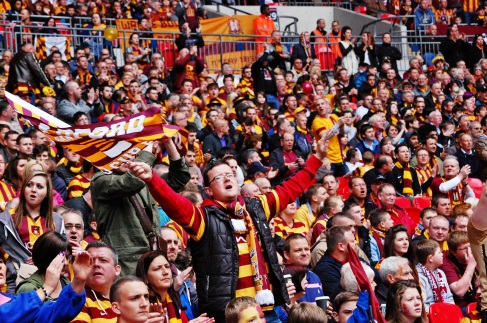 Bradford had two further chances to extend their lead, the first came from Gary Thompson who shot wide from the edge of the Northampton penalty area and the second fell to Kyel Reid who again shot wide on the volley for 8 yards.

Bradford fans will be looking forward to the next season when teams such as Preston North End, Coventry City, Sheffield United and Wolverhampton Wanderers will all be making the trip to Valley Parade. 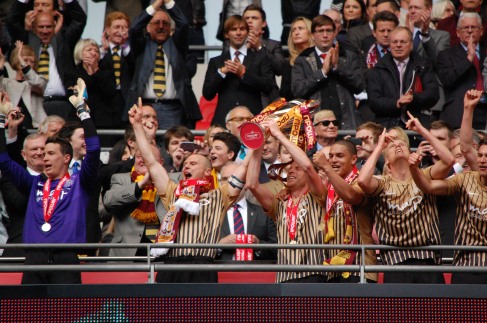