Burnley Veterans’ unbeaten run came to an end on Sunday afternoon at the Arbories, when Padiham FC came out on top in this seven goal thriller.  Despite having most of the possession, Burnley were not able to make in count.

A youthful Padiham side, which included some current first team players and former Claret Andy Farrell, were firmly camped in their own half, as the Vintage Clarets constantly pressed them.

Padiham’s opening goal came on the break after ten minutes, when Chris Ridehalgh let fly with a twenty-five yard screamer, which flew past the Claret’s keeper who had no chance.

The Clarets continued to look the better side and on twenty-one minutes Roger Eli nearly got on the end of an excellent run and cross from Gerry Harrison.  However the Padiham keeper managed to take the ball, before Eli could find the back of the net.

The Vintage Clarets continued to press with shots from Nigel Smith and David Hamilton before Roger Eli missed a free header from six yards following a Graham Lancashire corner in the thirty-seventh minute. 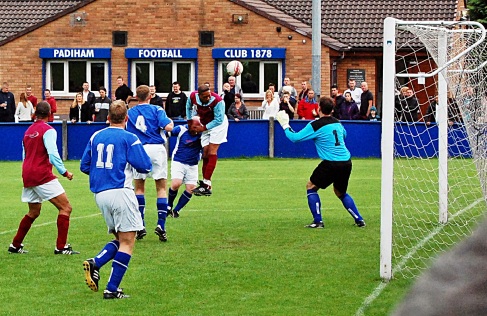 Five minutes before half time, Graham Lancashire collided with Padiham goalkeeper Kirk Marsden as he tried to get on the end of a Jamie Hoyland header across the box.  Mardsen landed heavily in the six-yard box and needed treatment.

Thankfully the Padiham goalkeeper was not seriously hurt, but was unable to take the goal kicks, so Steve Wilkes took them on his behalf.  Wilkes first goal kick found its way straight to Paul Fildes who, from nowhere, fired a daisy cutter in to the far corner of the Clarets’ net.

At half time, losing 2-0, former Burnley captain David Hamilton took himself and Roger Eli off  and replaced them with Ashley Hoskin and Liam Robinson.  These changes seemed to gave the Vintage Clarets a little bit of extra pace on the flanks and they started to take control of the game.

But, as they say, it’s a funny old game and five minutes later the ball was lobbed over the top of the Claret’s defence, bouncing unkindly for the keeper who was left stranded as Chris Ridehalgh calmly controlled the ball before slotting it into the open net to make it 3-0.

This third goal seemed to hurt the pride of the ex-pros and the Clarets started their come back.  Ashley Hoskin was first to test the Padiham goal, when he received the ball on the left wing and curled a shot from the edge of the area, which hit the Padiham bar and went out for a goal kick.

On the hour mark, Paul Scott replaced John Deary adding some much needed pace to the Claret’s midfield.  Moments later, Gerry Harrison played a delightful through ball to Graham Lancashire, who dummied the Padiham keeper and chipped the ball in to the back of the net.

On sixty-four minutes following an Ashley Hoskin cross George Oghani scored from header at the back post and the Clarets were back in the game.

On seventy minutes the Clarets thought they had a lifeline, when Ashley Hoskin went down in the penalty area.  The referee blew her whistle and pointed to the spot, however the linesman flagged and after a brief discussion, a free kick was awarded to Padiham to the absolute amazement of George Oghani.

George Oghani scored his second and the Claret’s third to make it 3-3 on the seventy-third minute, with the come back complete the Red Arrows made a flypast, obviously to mark the occasion.

It really was a tremendous fightback, but cometh the hour cometh the man, as Padiham’s Chris Ridehalgh completed his hat-trick in the dying minutes.

This goal give Chris Ridehalgh the match ball and the man of the match award, whilst ensuring the Storks won the game 4-3.  Perhaps the Red Arrows were ten minutes too early.