Phil Parkinson continued to freshen up his squad this week bringing in Middlesborough midfielder Matthew Dolan on loan until the end of the season.  Dolan who is primarily a midfielder, but is also comfortable in defence has spent time on loan at Yeovil Town and Hartlepool United in the last year.

In a fairly even first half, it was Bradford that had the first attempt at goal after seven minutes, when Matthew Dolan got on the end of a Stephen Darby throw-in, only to see his first time left-footed half-volley deflect wide for a corner.

Bradford’s second chance came on nine minutes when Gary Jones tried his luck from outside the area, however his shot was deflected up off the boot of a Crewe player before looping narrowly wide of Ben Garratt’s goal. 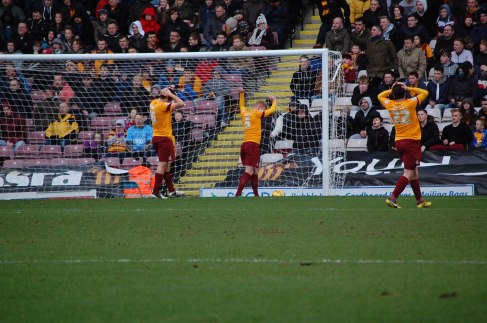 Crewe Alexandra took the lead on twelve minutes following a long ball over the top of the Bradford defence.  Carl McHugh tried to head the ball back towards Jon McLaughlin in the Bradford goal, however his header fell short and Uche Ikpeazu nipped in to lob the ball over McLaughlin and into an empty net.

The next real effort at goal came on forty-one minutes when Crewe’s Matthias Pogba fired in a ambitious drive from all of thirty-five yards that whistled over Jon McLaughlin’s crossbar.

On forty-three minutes the bantams had the final effort of the half, when Adam Reach’s first time shot from around twenty-five yards narrowly went over Ben Garratt’s crossbar.

Bradford again started the half the quicker of the two teams, nearly equalising two minutes after the restart.  A low Gary Jones’ cross into the area was missed by James Hanson, before falling to Adam Reach who was following up behind.  Reach’s effort was blocked by Garratt and with the Crewe keeper grounded, Matthew Dolan could only slide his effort wide of an empty net.

On fifty-four minutes, Crewe extended their lead following an excellent run by Bradden Inman, his cross found Chuks Aneke on the edge of the area, but his shot was well saved by Jon McLaughlin.  Uche Ikpeazu was first to the loose ball and slide it into the goal to give Crewe a 2-0 lead. 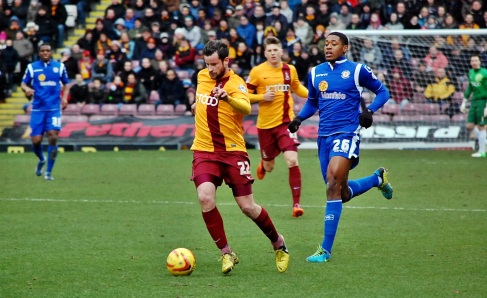 Crewe’s second goal seemed to bring Bradford to life, on fifty-eight minutes James Hanson pulled a goal back for the Bantams, a teasing cross from Aaron McLean across the Crewe box was met by Hanson who side footed the ball home from eight yards.

A minute later Bradford were level, when Aaron McLean received the ball at the edge of the Crewe penalty area, before laying it back to Gary Jones who drilled a superb shot into the bottom corner of the Crewe goal to make the score 2-2.

Bradford then had two chances to take the lead, the first fell to Aaron McLean on sixty-eight minutes, but his shot from the edge of the box was well saved by Ben Garratt.

The second chance fell to James Hanson following a Matthew Bates left foot cross, Hanson turned away from Crewe defender Mark Ellis only to see his effort from eight yards fly over the Crewe bar.

On seventy-eight minutes, Crewe extended their lead when Chuks Aneke played the ball into Matthias Pogba’s path and the striker fired a fierce angled drive into the far corner of the Bradford goal from about ten yards.

Bradford captain Gary Jones was not going to beaten in this game and he once again got the team on the front foot.  In the eighty-fourth minute he again linked up with Aaron McLean, who again set up Jones for a shot from the edge of the Crewe area that left Garratt helpless as the ball hit the back of the net to make it 3-3.

James Hanson could have won the game for the Bantams in the last minute, but his header from six yards was well saved by Garratt in the Crewe goal following a pin point cross from Adam Reach.

Parkinson said: “Gary Jones is our captain marvel, he deserves all the accolades he gets tonight, because those were two truly magnificent goals.  It wasn’t just his goals today though, he is a superb example to all the other players, he typifies the spirit we have tried to instill at the club.”