After two excellent performances on the road at high flying Leyton Orient and Coventry City, Bradford City returned to the Coral Windows Stadium to face league one strugglers Oldham Athletic. Prior to the game, six members of the famous 1969 Fourth Division promotion winning team including Bruce Bannister, John Hall, Ian Cooper, Jimmy Cuthbert, Tom Hallett and Charlie Rackstraw were introduced to the crowd. 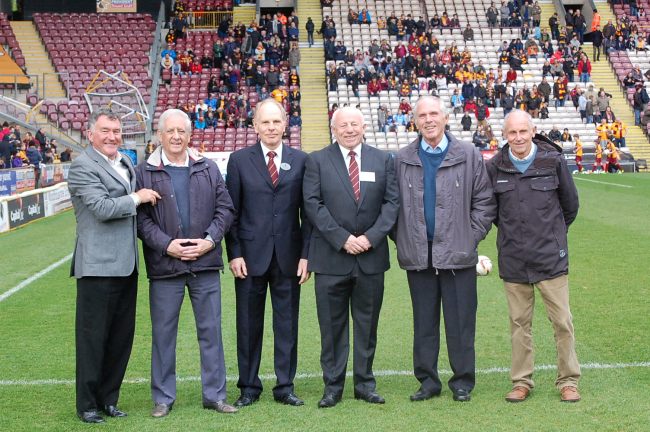 Bradford City once again turned in a poor performance in front of a large home support, there was very little action to talk about in the first forty-five minutes apart from the two goal which meant that the team’s went in at level at half-time.

Jon Stead had the first attempt on goal after three minutes following a run and cross from Kyel Bennett, the cross found Stead inside the area but the striker’s header went wide of Paul Rachubka’s far post.

The second effort of the half also came from Bradford, when Kyel Bennett collected the ball in the middle of Oldham half before trying his luck from distance, his shot was well-struck but it sailed some distance over Rachubka’s bar. 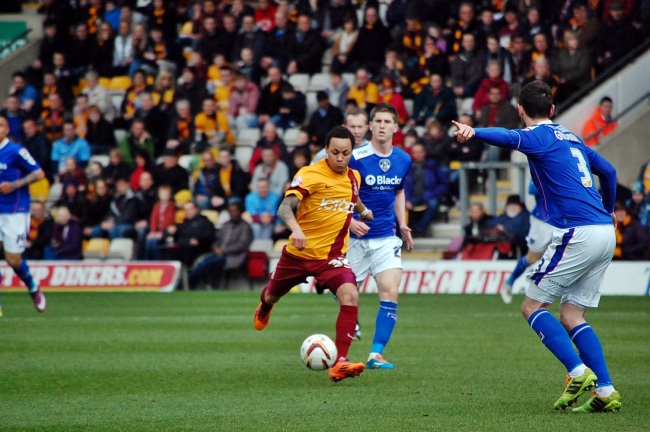 The next real chance come on twenty-three minutes, when the visitors take the lead through James Wesolowski. Connor Brown’s clipped ball into the area is headed down by Jonson Clarke-Harris into the path of the on-rushing Wesolowski, who shot right-footed past Jon McLaughlin from around eight yards.

Just after the half hour Phil Parkinson seemed to make a slight tactical change, Aaron McLean moved to the right wing whilst Kyel Bennett seemed to move along side Jon Stead in a attacking midfield role a sort of a 4-2-3-1 formation.

On thirty-five minutes, Bradford City drew level following a superb pass from Matthew Dolan to picks out Adam Reach who turned inside an Oldham defender before calmly slotting the ball into the goal from around ten yards to make the score 1-1.

On the stroke of half-time, Oldham retake the lead as Gary Harkins drifted in-field with the ball from the left wing before playing the ball into an unmarked Jonson Clarke-Harris who was positioned only a few yards in front of goal, Clarke-Harris then hit a shot pasted a helpless Jon McLaughlin to make the half-time score 2-1. 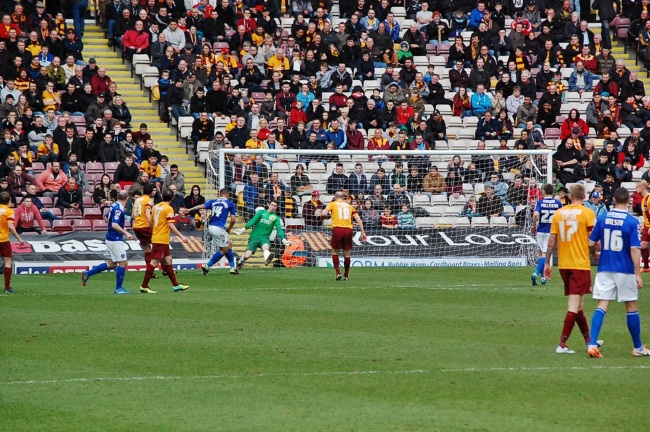 The second half was much the same as the first, with a very slow start and a lot of miss placed passes from both side.  However it got worst for Bradford just before the hour mark, when Jonson Clarke-Harris increased Oldham’s lead to 3-1.

Jonathan Grounds intercepted a pass in his own half before playing the ball to Clarke-Harris who ran at McLaughlin’s goal, Andrew Davies slid in to make the block as Clarke-Harris takes aim inside the area, but the striker’s shot still managed to find the bottom corner of the net.

The next thirty minutes were controlled by Oldham as tried to keep the ball and hit Bradford on the counter-attack, this finished the game as a contest, however Bradford did get an injury time consolation goal on ninety-four minutes to make the final score 3-2.

Speaking after the match manager Phil Parkinson said, “We haven’t defended well and we’ve given away some very poor goals today. The team looked like they lacked energy, we have to look at ourselves because the last couple of home games we have been disappointing.

I’ve picked roughly the same side three times in seven days and I need to look at myself for that. In the last couple of years, even this year when we’ve been struggling for wins and only getting draws. The performances were a lot better at home than the last couple of games. We have to look for reasons for that and try to resolve things next time we’re at home.”