Guiseley came from behind to beat Colwyn Bay at Nethermoor Park and continue their push for a play-off spot and promotion to the Skrill Conference at the end of the season.  The match also marked the 400th appearance of captain Danny Ellis who has spent nine season’s at Guiseley following his release from Bradford City.

Colwyn Bay had a slight edge in a fairly uneventful first half, the home side struggled to make headway against Colwyn Bay’s two banks of four.  Steven Drench in the Guiseley goal was the busier of the two keepers, making telling saves from Jamie Crowther and Jamie Ellison and one brilliant point-blank save from Rob Hopley.

Danny Boshell took a nasty kick to the face which caused a delay in the game of around five minutes whilst the Guiseley assistant manager received treatment and then swooped his blood stained shirt.

Guiseley did breach the Welshmen’s defence on two occasions in the first half when Adam Boyes sent two balls across the six-yard box, however there was no one in the box to add a finishing touch.

Mark Bower changed the Lion’s to a 4-4-2 formation for the second half pushing Danny Forrest along side Adam Boyes to boast the Guiseley forward line.

The game eventually came to life on fifty-seven minutes when an innocuous-looking challenge by Danny Ellis in the home penalty area was adjudged to have been a foul by referee Glen Hart, Jamie Ellison stepped up for the visitors to send Steven Drench the wrong way from the spot.

Oli Johnson replaced Danny Forrest and nine minutes later the Lions were level as he showed great footwork to dazzle two defenders before pulling the ball back from the bye-line for Adam Boyes to strike on the half-volley to make it 1-1 and square matters.

Spurred on by their success, the home side launched a series of attacks and they were rewarded on seventy-two minutes when Wayne Brooksby floated in a free kick that was headed back into the mix by Danny Ellis, only for an attempted clearance to fall to Gavin Rothery, who rifled the ball past Chris Sanna and into the bottom corner. 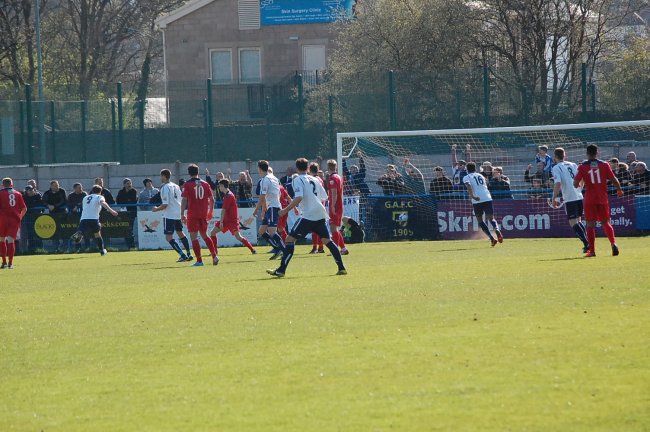 Danny Ellis was again the provider a couple of minutes later as his header set up Adam Boyes, who was only denied by Colwyn Bay goalkeeper Chris Sanna who whipped the ball off his toes.

Gavin Rothery nearly grabbed his second late on, running half the length of the field before shooting a whisker wide of the target, and Adam Boyes brought another good stop from Chris Sanna to prevent Guiseley increasing their lead. 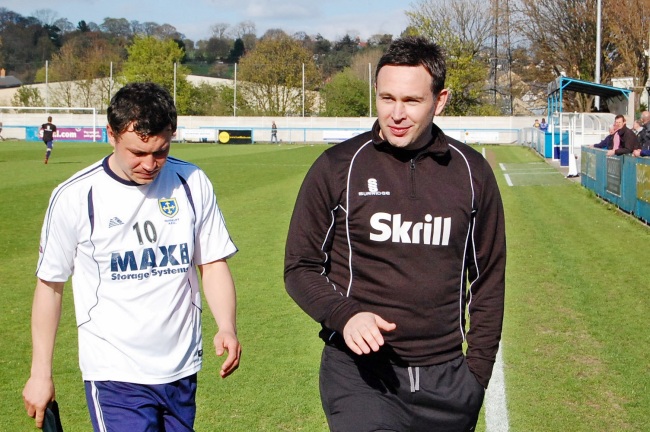 Speaking after the match Guiseley manager Mark Bower said, “We were not at our best today, but the lads dug in and turned the game around to collect all three points. At this stage of the season the three points are all that matters, we now go to Workington on Monday to cement a play-off place.”