Burnley Football Club welcomed FA Cup holders and Play-off hopefuls Wigan Athletic to Turf Moor knowing that a victory would secure a return to the Premier League next season after a four year absence.  Once inside the stadium you could feel the promotion party atmosphere and the Clarets did not disappoint, winning the game 2-0 with an excellent display to achieve promotion.

In a fairly even first-half it was the Clarets who started brightly, after two minutes Ashley Barnes played an excellent pass behind the Wigan defence for Danny Ings, however the clarets striker was beaten to the ball by Wigan goalkeeper Ali Al Habis.

On sixteen minutes Michael Kightly collected the ball on the half way line before running down the right wing and sending a cross into the six yard box towards a waiting Scott Arfield, however Wigan’s James Perch slide in to clear the ball. 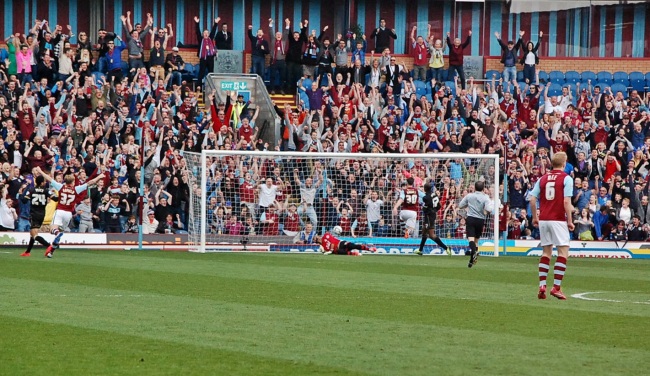 The pressure told on Wigan after twenty-two minutes when Danny Ings played a one touch ball to Dean Marney who ran into the Wigan penalty area, before his first-time cross found Ashley Barnes who tapped the ball home from six yards to give Burnley a 1-0 lead.

Wigan’s first real effort came on thirty-two minutes, Jordi Gomez floated in a free-kick from the edge of the box and the header from Marc-Antoine Fortune hit the Burnley post with Tom Heaton beaten, the rebound fell to Emmerson Boyce who lashed his shot over the Burnley crossbar.

Burnley were awarded a free-kick after forty-two minutes for a foul on Scott Arfield on the left hand side of the penalty area, Michael Kightly took the free-kick which evaded everyone and flew into the corner of Al Habsi’s goal to give Burnley a 2-0 lead at half-time.

It was clear at half-time that the Wigan manager Uwe Rosler was not happy with his teams performance, he made two changes bring on Kieman and McManaman for Gomez and Crainey.  Rosler also spent the half time interval on the pitch giving instructions to his subs instead of being in the dressing room speaking with his team.

Rosler’s instructions did make an impact and just after the interval Wigan substitute Callum McManaman was received the ball before running at the Burnley defence, were he found some space at the edge of the Burnley box but his shot went just wide of the Clarets goal. 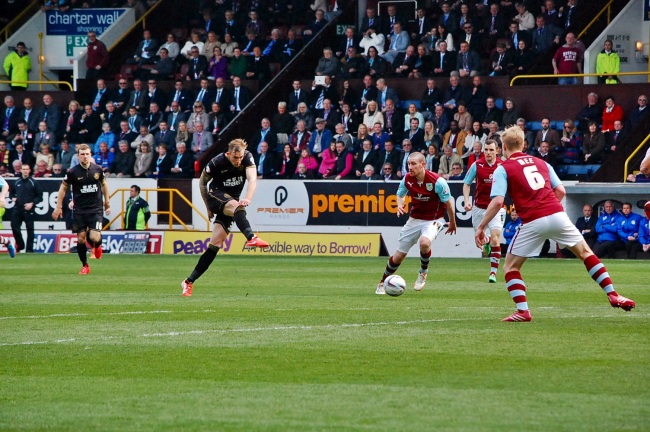 Wigan continued to press froward and on forty-seven minutes Jack Collison on loan from West Ham United unleashed a daisy cutter from all of twenty-five yards, which was tipped around the post for a corner by Tom Heaton in the Burnley goal.

Michael Kightly then collected the ball on the halfway line before running at the Wigan defence and hitting a right footed drive from twenty-five yards which went inches past Al habsi’s far post.

Wigan then had another two chance the first was an effort from James McArthur which went wide of the Burnley goal, but the second was a determined effort from Marc-Antoine Fortune which well again saved by Tom Heaton.

On the hour mark Danny Ings went close to his twenty first league goal of the season, the striker won the ball on the left wing before running into the Wigan area and hitting the post from a tight angle, his shot had Al Habis well beaten in the Wigan goal.

The game continued to be end-to-end for the next ten minutes, as first David Jones forced Al Habsi into an excellent save from a twenty-five yard free-kick, before Emmerson Boyce again tested Heaton in the Burnley goal with a header.

Burnley controlled the last ten minutes of the game keeping the ball in the Wigan half and running down the clock in the corner’s.  The Clarets fans were in fine voice, singing “We are Premier League” and “Gringer Mourinho” whilst starting to come onto the pitch side.

There was just time for one more effort at goal from Ashley Barnes as he struck a twenty-five yard volley which Al-Habsi saved before the full time whistle blow and hundreds of Burnley fans poured onto the pitch.

Speaking after the match Burnley Manager Sean Dyche said, “It’s an amazing day and one that will certainly go down in the history books for this football club. There were a few people outside the football club wondering whether we could last the distance, but we stayed focused on winning football matches and that is a massive credit to my players, staff and to the fans.

We have only lost twice at Turf Moor this season and the fans have stayed positive and helped us achieve this remarkable achievement, the fans have played a huge part, particularly from Christmas onwards they have been absolutely incredible.

Some of the talent this season and some of the goals have been absolutely incredible, the first goal today from Ashley Barnes was worthy of any football pitch. It’s been a momentous occasion for everyone at the football club and for me to guide this group of players to the Premier League is exceptional. I’d like to thank my staff as it is a great job they’ve done.”