The final home game of the season at Valley Parade is always poignant, as the club and its supporters remember the fifty-six people who sadly lost their lives in the fire on the 11th May 1985, this year the club also paid a special tribute to recently retired Prof David Sharpe OBE.

Professor Sharpe was the consultant plastic surgeon at St Luke’s Hospital, Bradford in 1985 and treated a number of the fire victims in the weeks and months after the fire.  A year later in 1986 Prof Sharpe established the Plastic Surgery & Burns Research Unit at Bradford University, which now receives worldwide recognition for its research in the field of plastic surgery.

The unit has had twenty-six surgeons conducting valuable research over the years and the majority of them have gone on to be consultant plastic surgeons, mostly around the UK but some overseas.  The Plastic Surgery & Burns Research Unit will continue to operate from Bradford under the leadership of Mr Ajay Mahajan (Consultant Plastic Surgeon).

The Coral Windows Stadium fell silent for one minute as a mark of respect to the fifty-six people who lost their lives at Valley Parade in the fire, Crawley captain Josh Simpson showed a touch of class when he ran from the halfway just before kick off, to place a scarf and a wreath behind the goal of the Kop, which is greeted by a round of applause from City supporters.

City started the better of the two teams and had their first effort at goal on nine minutes when Rory McArdle had a header saved by Crawley goalkeeper Paul Jones following a Gary Jones free-kick.  Jones then went close on fourteen minutes after an excellent pass from Aaron McLean, but his shot from around twenty yards went over the Crawley crossbar.

On fifteen minutes, Crawley’s Matt Tubbs his a shot from distance which takes a deflection and loops up in the direction of Jon McLaughlin, who gathers the ball at the second attempt to stop the ball going out for a potentially going corner.  After twenty-eight minutes a surging run from defender Andrew Davies ended with a thunderous rising drive from just outside the box which Paul Jones managed to save.

On thirty-eight minutes Mark Yeates nearly opened the scoring for Bradford City when he curled a free-kick from just outside the area narrowly wide of the far top corner of Paul Jones’ goal.  Crawley’s Sergio Torres then went close with a shot from the edge of the Bradford penalty area which went just wide of Jon McLaughlin’s goal.

In the final minute of time added on at the end of the first, Crawley goalkeeper Paul Jones punches a Gary Jones corner which falls to John Stead, but his first time snap shoot is well saved by Paul Jones to make the half-time score 0-0.

Bradford City started the second half well and took the lead on fifty minutes when Aaron McLean got on the end of a delightful Nathan Doyle ball over the top of Crawley defender McFadzean.  McLean then drove in a fierce low strike that whistled past a helpless Paul Jones and into the bottom corner. 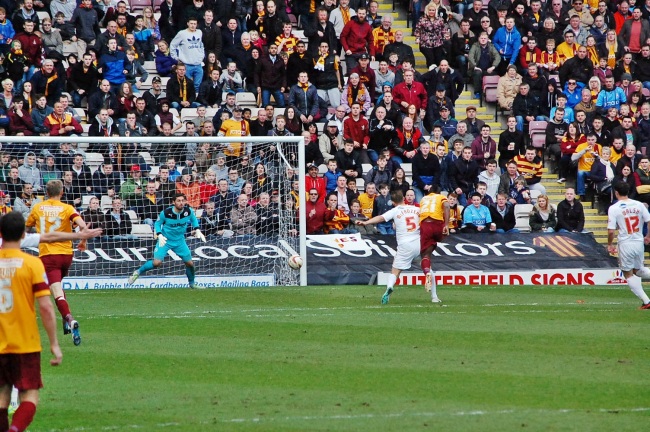 On fifty-six minutes Rory McArdle made an excellent headed clearance and took a boot to the head, City then went down to ten men as McArdle had to leave the pitch to receive further treatment, then on fifty-nine minutes he had to be replaced by Carl McHugh.

Crawley Town then equalised on sixty-six minutes when Kyle McFadzean’s long ball over the top, dropped over the head of Carl McHugh which allowed Jamie Proctor to nip in and lob the ball over the stranded Jon McLaughlin with a well-placed effort from just outside the area to make the score 1-1.

On seventy-eight minutes Mat Sadler hit a low fierce drive from a free-kick from just outside the Bradford penalty area which Jon McLaughlin does well to hold.  Then just two minutes later Matt Tubbs’ shot wide of Jon McLaughlin’s goal after the striker was closed down by Carl McHugh.

Following an excellent Mark Yeates through ball, Gary Thompson managed to get a shot at the Crawley goal which was turned away by Paul Jones for a Bradford corner.  However Thompson was not to be denied when he glanced a header past Jones from the resulting Gary Jones corner on eight-six minutes to give Bradford a 2-1 win.

Speaking after the match manager Phil Parkinson said, “It was nice to see the supporters staying around to clap us off the field at the end, they understand how important it is for the club and the players to stay in this division.  The supporters have shown us magnificent loyalty again this season and we want to finish the season off well at Tranmere Rovers next weekend. 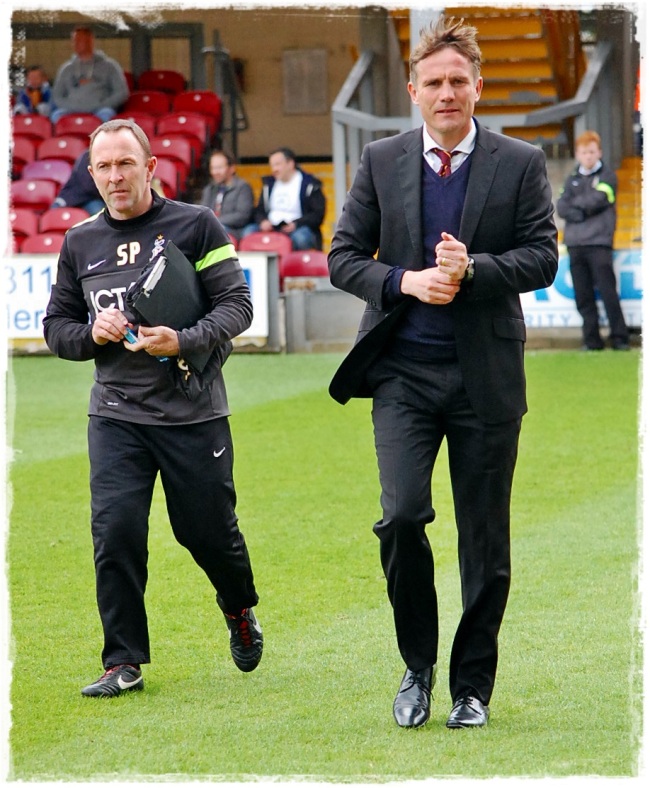 Today was a big day for the City of Bradford as well as the club and I said to the platers before the kick-off that they were representing a lot of people so it’s important we give a professional performance. I think the lads did themselves justice and the supporters responded to that at the end.”