Bradford City Ladies entertained Wolverhampton Wanderers Ladies at the Coral Windows Stadium for the final home game of the FA Premier League (Northern Division), City’s ladies adapted to the impressive surroundings of Valley Parade quicker then there opponents and they went on to win the game 4-0.

City went into the final two league games of the season knowing that four points from two games against Wolverhampton Wanderers (home) and Preston North End (away) would secure the runners-up spot in the FA Premier League Northern Division.

Bradford took control of the game straight from the kick-off playing some neat, simple, patience football which had the Wolverhampton team on the back foot for the whole ninety minutes.  In the early stages of the first half City put some pressure on the Wolves right-back with some excellent play down the left wing from both Sarah Danby and Jodie Redgrave.

City’s centre forward Molly Mae Sharpe was making some tireless runs in attack, causing the Wolves back four and goalkeeper into early errors, that pressure told on ten minutes when Bradford took the lead.  Sarah Danby got onto a loose ball just inside the Wolves half before switching the ball to the right-hand side of the field to captain Faye Boshell, who then in turn sent a perfect ball to the feet of Rachel Lee who shot from 30 yards into the top corner of the goal. 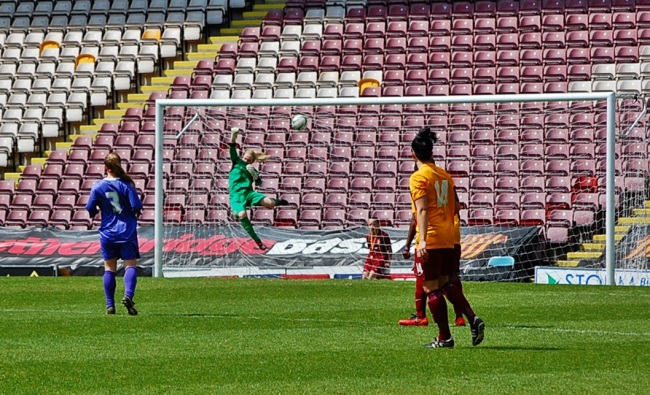 Wolves then had a spell of possession and started to apply some pressure on the Bradford goal but Charlotte Stuart, Faye Boshell, Paige Crosby and Jodie Redgrave held solid at the back and kept Wolves to long range efforts that didn’t trouble Simpson in the Bradford goal.

On fifteen minutes Sharpe came close to doubling City’s lead when she chased down a through ball but the Wolves keeper was quick off her line and saved well.  Minutes later Danby found herself with just the keeper to beat after an excellent cross from Paige Crosby, but her well struck volley shaved the outside of the Wolves post and went wide.

Bradford extended their lead on twenty-one minutes after a well taken corner was headed back across the six yard box by Bradford captain Faye Boshell to Rachel Lee who placed the ball under the stranded Wolves keeper for her and Bradford’s second goal.

At the start of the second half, Bradford made a change when Rosie McDonnell one of the youngest senior players at City and lifelong Bradford City fan replaced Caroline Omboyi on the left wing.  The fresh legs of McDonnell started to cause the Wolves defence some problems as the heat started to take its toll on the players.

On seventy-three minutes City increased their lead when Rachel Lee intercepted a pass in the Wolves half and threaded the ball through two defenders to play in Molly Mae Sharpe down the right wing, her perfect ball into the Wolves area was met by Sarah Danby who chested the ball before sending a left-foot volley past the Wolves goalkeeper to give Bradford a 3-0 lead. 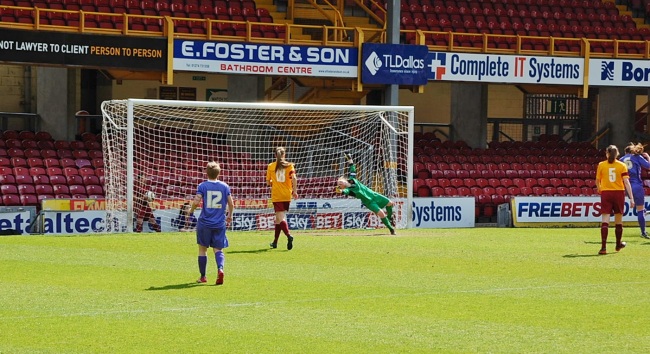 A minute after the restart, Aimee Driver came on to replace Molly Mae Sharpe, who received rapturous applause from City supporters following an excellent performance, it took Driver just five minutes to get the ball into the back of the Wolves goal but her effort was disallowed for offside.

However City hadn’t quite finished just yet, on eight-three minutes City keeper Carrie Simpson cleared the ball straight to McDonnell deep in the Wolves half, her first touch was excellent and she played a lovely 0ne-two with Aimee Driver before McDonnell skinned both the Wolves midfield and defence before sending a thunderous left-foot shot into the net from around the penalty spot to give City a 4-0 victory.

The result see’s City move into second place in the league table just one point a head of Preston North End who the Bantams meet next Sunday to decide who will become runners-up of the FA Northern Premier League. 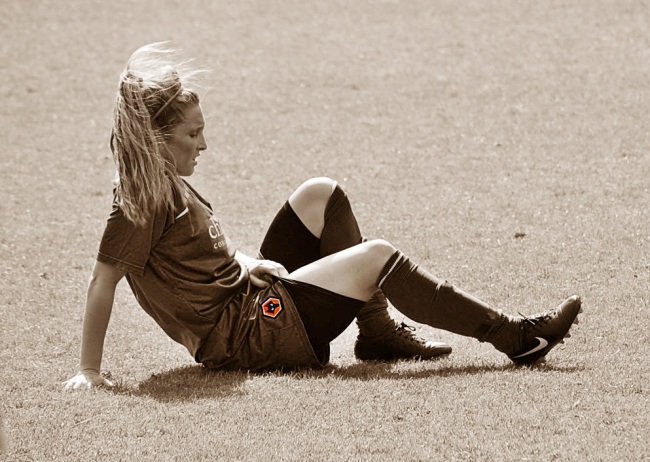 Speaking after the match the Wolverhampton Wanderers manager Trevor Mullings said: “It was a typical end of season game for us, there was no urgency from the players and we found it difficult to retain the ball. Bradford played with more conviction and purpose and deserved the win. We need to regroup and build on the positives from the season in readiness for next term.”