A Clarence Seedorf hat-trick inspired Jose Mourinho’s Rest of the World team to a 4-2 win over England at Old Trafford in Soccer Aid 2014. The Dutch midfielder rolled back the years with an impressive performance in the charity game which raised 4.2 million pound for UNICEF.

England started the better of the to sides with Olly Murs starting brightly and he brought the first save of the game out of former Manchester United goalkeeper Edwin Van Der Sar after just four minutes. After collecting a lovely cross-field pass from Kevin Phillips, Murs skipped down the left wing before cutting inside and curling an effort straight at van der Sar.

Three minutes later Murs powered into the area with his cross falling to McBusted’s Danny Jones but his low drive was well blocked.  Phillips was proving a nuisance for Stam and co. and went close with a flicked header after rising to meet Jonny Wilkes’ free-kick.

The Rest of the World took their time to get going, but after manager Mourinho had stepped onto the pitch to try to win the ball off Murs, much to the surprise and delight of the raucous Old Trafford crowd, they began to look dangerous with their two no.10s, Seedorf and Alessandro Del Piero, pulling the strings.

The pair combined on 20 minutes inside the area, with the impressive Des Walker needing to make a good block. Seedorf then tried his luck from 35 yards before flicking the best chance of the half just wide from six yards after linking up with Del Piero once more.

The Italian striker was replaced by Andriy Shevchenko at the break and the substitute made an immediate impact on 47 minutes. After Byrne had received the ball on the right wing, he sent a cross over to Shevchenko, who laid the ball off to Seedorf to smash into the roof of the net.

England went close to restoring parity three minutes later when another substitute, Jack Whitehall, met the impressive Jones’ cross, only to be denied by a brilliant point-blank save from Patrick Kielty, on for van der Sar. 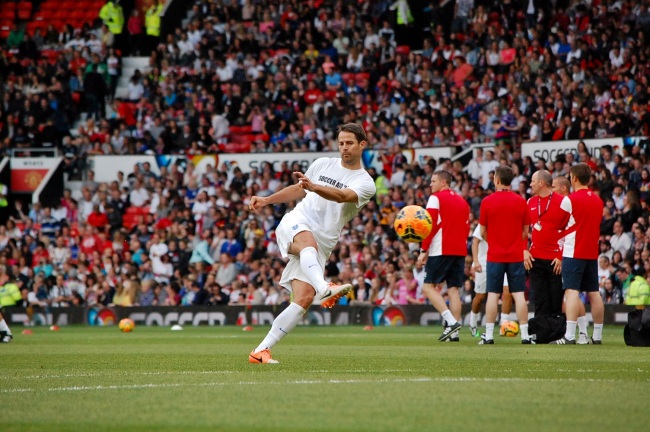 England substitute Jamie Redknapp gave Sam Allardyce’s men hope on 75 minutes when he fired a 30-yard drive past Kielty and a foul by Martin Compston on Phillips in the box, six minutes later, gave England the chance to draw level. Phillips duly converted from the spot.

The game seemed set to go to penalties but, four minutes from time, Seedorf had other ideas. After collecting the ball inside his own half, he skipped forward before cutting inside and letting fly with a curling 20-yard effort which deflected off Whitehall and sailed past Theakston in the England goal. The Dutchman found the net again in added time when he headed home Santiago Cabrera’s cross as Mourinho’s Rest of the World reclaimed the Soccer Aid trophy.