Keighley Cougars this weekend welcomed Rochdale Hornets to Cougar Park for what proved to be a game of two halves, the first was a fairly even low key affair, however the second was all Keighley and they made Rochdale pay for their errors.

Cougars made little impact in the first half and they seamed to struggle after Danny Jones was taken off with a hamstring injury on eight minutes, an injury which rules the Welsh international out of Thursday’s derby at former club Halifax.

On eighteen minutes, Man of the Match Paul Handforth made his first trolling contribution of the game by racing over the line for the first try of the match, before stepping up to take the conversion to give Keighley a 6-0 lead.

The next twenty minutes were very even with a lot of the play in the middle of the park, however just after Paul White was narrowly denied by a great covering tackle, moments before the hooter, James Haley grubber kicked behind and after a wild flailing attempted clearance by Sheridan, the centre touched down his own effort to take a ten point lead into half time.

The second half was a completely different story as Keighley ran riot, scoring seven tries, the Cougars first set of the second half brought another try when Paul Handforth kicked into space and Danny Lawton won the race against the veteran Stuart Littler to get the score.

Five minutes later, it was Paul Handforth with another assist when he off loaded out of a tackle to provide Josh Lynam who ran over the line for another four points before Handforth adds the conversion to give Cougars a 22-0 lead.

On fifty-three minutes Handforth this time feed Craven who touched down under the posts before Handforth again scored the conversion to make it 28-0. 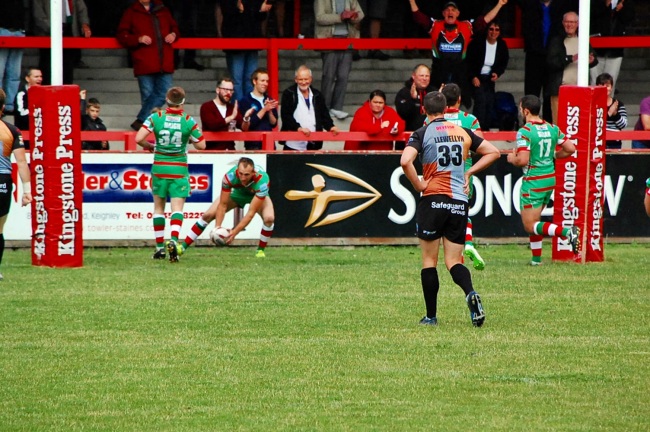 Rochdale’s best move of the game came on fifty-seven minutes when following two excellent quick passes, Ryan Millard went over the line before Crooks added the conversion to give the visitors their first six points of the game.  Just after the hour mark it was Paul White drives into the corner to give the Cougars a 32-6 lead.

On sixty-nine minutes James Craven scored his second try following another excellent pass from Paul Handforth who then scored the conversion to extend the lead to 38-6.  On seventy-two minutes Handforth was cleaned out by the Rochdale forward just after getting his kick into touch, from the restart Handforth set up yet another try which was this time scored by Haley to give Keighley a 42-6 lead.

On seventy-eight minutes Paul Handforth scored his second try of the game and they scored the conversion to give the Cougars a full time score of 48-6. Handforth was also awarded the Man of the Match.

Speaking after the game Cougars Performance Director Paul Royston said, “Well, Danny Jones has been outstanding this year, so it’s a really massive loss when a player like Jonesy has to come off. We looked for an immediate response by the lads and re-organise and I thought we responded really, really well.”