Bradford City opened their 2014/15 Sky Bet League One season with a dramatic last minute win over Coventry City at the Coral Windows Stadium.

In a rather tentative opening quarter of an hour, Coventry had the only couple of half chances as Jordan Clarke looped an effort over the bar when he had beaten Alan Sheehan to Josh McQuoid’s low cross at the far post. Danny Pugh then carved an opening for Jim O’Brien with a raking 30 yard, defence splitting pass, but the latter dragged a shot wide of the mark to waste a glorious opportunity.

City had a penalty appeal waved away by referee Mike Dean in the 20th minute of the game; Sheehan’s free kick was headed back across the 6 yard area by Rory McArdle and as Andrew Davies went to attack the ball he went down under a challenge from Andrew Webster but Mr. Dean proved to see nothing in the coming together. 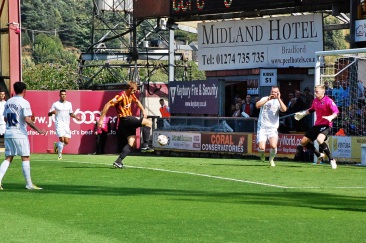 From the turned down penalty appeal, the Bantams seemed to spark into life somewhat and shortly after James Hanson was kept off the scoresheet by some heroic goalkeeping from Coventry’s Bournemouth loanee Ryan Allsop. Gary Liddle’s cross into the area was cushioned down by the head of Billy Clarke and Hanson’s untidy attempt on goal was held on the line by the visiting goalkeeper.

An opening goal came shortly after however and it was to be Hanson who would score it. Billy Knott did excellently to win back possession and find Clarke who produced a perfect cross for Hanson to guide a header brilliantly past Allsop.

Mark Yeates had a chance to double his side’s lead shortly afterwards; picking up a ball on the edge of the area he proceeded into the 18 yard box and cut inside Webster before seeing a left footed drive kept out by Allsop in the Coventry goal.

With City looking good value for their slim advantage, Coventry equalised from a set-piece. After Danny Swanson’s in-swinging corner led to another one, it was Danny Pugh’s left footed delivery which saw towering centre half Reda Johnson beat debutant goalkeeper Jordan Pickford in an aerial challenge and power home a header with half time just around the corner. 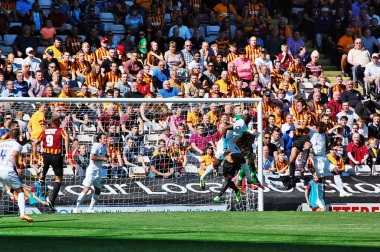 City started the second half very brightly and went in front from the penalty spot on the 49th minute. Darby’s hopeful cross was going out for a goal kick until Jordan Clarke attempted a header back across to Allsop which went behind for a corner kick, from the resulting corner a penalty was awarded by Mike Dean after Johnson was found guilty of having too much of a hold on Hanson. Alan Sheehan stepped up and made no mistake from 12 yards, sending Ryan Allsop the wrong way. 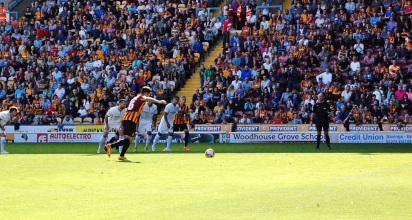 Man of the match Billy Clarke worked tirelessly all afternoon and after he’s charged Jim O’Brien’s attempted clearance into the air, Hanson’s cushioned header teed up Knott for a half volley that he scuffed wide of the target. A couple of minutes later though up the other end of the pitch, Stephen Darby produced an excellent block to keep Danny Swanson’s shot out after he’d escaped the attentions of McArdle. 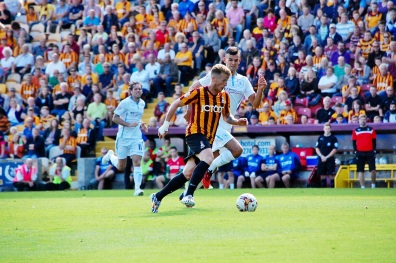 The second half began to turn into a really entertaining end-to-end affair and after Hanson was kept out from a tight angle by Allsop following Mark Yeates’ intelligent through ball, up the other end on this occasion it was only due to the vital intervening tackle from Andrew Davies that denied McQuoid the chance the stroke the ball in from close range after he’d latched onto a Marcus Tudgay pass.

Sunderland loanee goalkeeper was having a tough debut having to deal with the aerial threats that Coventry had on offer and after he’d missed Swanson’s corner under pressure from Johnson, City had to scramble the ball off the line through Gary Liddle, who also had an impressive home debut. 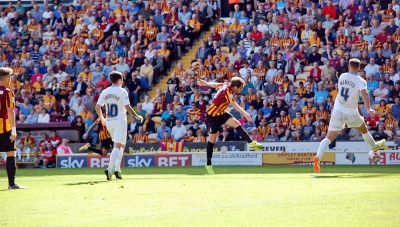 The game was still in the balance at 2-1 but it could’ve been three when a free flowing attacking move, crafted by Billy Clarke, was ended with Matty Dolan’s 20 yard thumping drive going narrowly wide of the post.

Pressure began to mount on City in the latter stages as Coventry piled on the pressure in search of an equaliser and after substitute John Fleck saw a vicious 25 yard effort beaten away by Pickford, moments later the visitors had their second equaliser of the match. Danny Pugh was allowed the space to deliver a cross into the area which was headed towards goal by Tudgay, Pickford denied him brilliantly but Johnson was on hand to slam home the rebound. 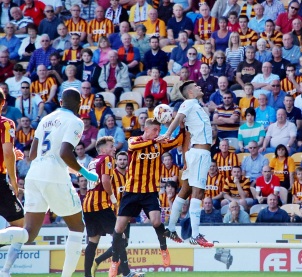 With the game looking to be heading for a 2-2 draw despite the Bantams being the better side over the course of the game, they got their deserved winner. Breaking quickly from kick off, the ball was worked to Jason Kennedy who delivered an inch perfect cross which was buried by the head of James Hanson for his second of the afternoon and a last gasp winner.

There was still time for more drama down the other end though as Coventry piled forward once again, John Fleck picked up a loose ball and surged into the area before going down under the attention of Andrew Davies; the referee Mike Dean though pointed for a free kick in City’s favour and booked the Scotsman for simulation. 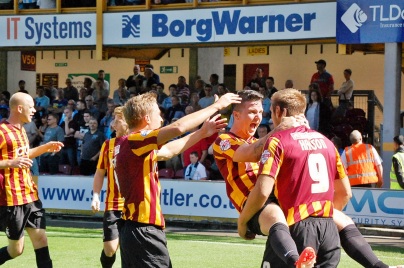 Speaking after the game manager Phil Parkinson said, “I thought it was a great game, very entertaining for both sets of supporters.  It was a bit similar to the game we played against them last season, I felt it was another great advert for the division.

Sometimes opening day games can be cagey affairs but some of the football played out there today was excellent.  At one stage it looked like we might have to take a point, but I felt we deservedly won the game in the end.

We wanted to put a marker down in front of our own supporters, you need to show commitment, drive and passion to wear the Bradford City shirt and I felt the lads did that. It’s unfair to single anybody out really because I felt one to eleven we were very good today.

The first run, the first tackle, the first cross, the first header was always going to be important today as it lifted the crowd and as we know, once you get this crowd out of their seats, they can make a real noise for us.

The first three points on the board is always important, however so is making sure we don’t think we have cracked it after just one game.  There is still a lot of things we can improve on and we will get back to work Monday morning and look to improve again.” 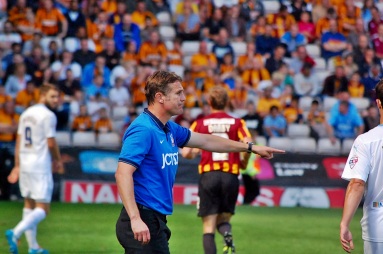