Leeds United arrived at the Coral Windows Stadium for the Capital One Cup second round tie knowing that defeat would increase the pressure on under fire manager David Hockaday.

Phil Parkinson made four changes to the side that were beaten by Peterborough United last weekend, in came Ben Williams, James Meredith, Billy Clarke and Aaron McLean to replace the cup-tied Jordan Pickford, Mason Bennett and the injured Andrew Davies whilst Filipe Morais dropped to the bench.

Leeds started the game brightly as Matt Smith headed narrowly wide of Williams goal in the first minute from a Scott Wootton cross, from the resulting corner Smith then sent a powerful header just over the crossbar from a Murphy corner.

On seven minutes, Luke Murphy picked up the first of his bookings for an awfully timed challenge on Gary Liddle, the former Crewe Alexandra midfielder was lucky not to see a straight red card for what was an awful challenge..

City had the best chance of the half on seventeen minutes when former Leeds United player Alan Sheehan delivered an excellent left footed free kick, unfortunately for City Aaron McLean headed the ball narrowly wide of the Leeds goal with Stuart Taylor beaten.

On thirty minutes, Luke Murphy was given his marching orders by referee Graham Scott for a second bookable offence which was another late challenge this time on James Meredith, Murphy had no real argument about the sending off after making two silly challenges that reduced Leeds to ten men. 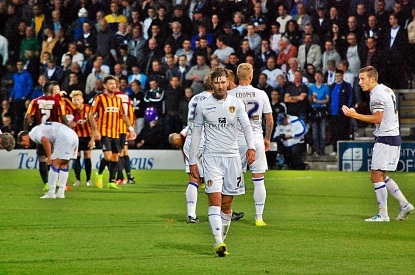 City then had two further chances in the first half, the first fell to Jason Kennedy who came close to breaking the deadlock when a Billy Clarke ball forward was helped on by James Hanson and Kennedy hit a firm half volley from a tight angle that hit the side netting.

Gary Liddle then had the second chance on the stroke of half-time but his well hit long range strike was held comfortably by Stuart Taylor in the Leeds goal, to leave the half time score 0-0.

Early in the second half, City came close to breaking the deadlock once again through Jason Kennedy, when James Meredith’s low cross into the area was missed by Clarke before Kennedy made contact with the ball, but he turned his effort narrowly wide of the target with Taylor seemingly a bystander.

Billy Clarke was looking lively on his return from injury and was trying to play his part in City’s attempt to get through Leeds’ back line and was denied by a goalmouth clearance by Jason Pearce. Latching onto Sheehan’s deflected cross, he forced the ball towards goal but the Leeds skipper was on hand to avert the danger.

Billy Knott then tried his luck from range but his deflected attempt from outside the area bobbled through a few bodies inside the 18 yard box and was held alertly by Taylor who was having a decent outing for the visitors, the usual first choice keeper Marco Silvestri taking a seat on the bench for this one.

With only eight minutes of the ninety remaining, against the run of play, Leeds took the lead with a fast counter attack as City tried to get back into position, David Norris angled a cross towards the far post where Matt Smith powered a header beyond Williams to give Leeds a 1-0.

The Bantams responded two minutes later with an equalising goal, when an Alan Sheehan corner was cleared as far as Billy Knott who brought the ball down and smashed a shot into the top corner leaving Stuart Taylor with no chance to make the score 1-1.

Just two minutes after the equaliser, Billy Clarke feed the ball out to Gary Liddle, who had produced a hard working performance in the middle of the park, floated a great cross towards Hanson and he powered a stooping header through the legs of Stuart Taylor into the back of the net to give City a 2-1. 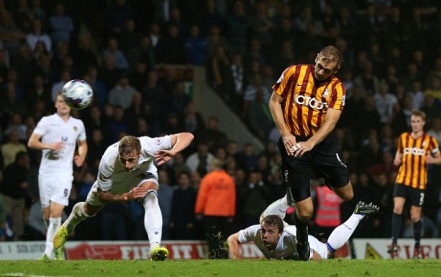 Leeds went agonisingly close to an equaliser in the nine minutes of additional time, when Wootton’s free kick was headed down by Smith into space and substitute Dominic Poleon saw his attempt go just wide of the target.

With virtually the last touch of the game, Smith went close to scoring his second of the evening; Michael Tonge’s pinpoint free kick to the far post saw Smith win the aerial challenge once again but his header went over the bar to give City a 2-1 win.

Speaking after the match manager Phil Parkinson said, “Without a doubt this is a big moment, we know what this means to the people of Bradford and we said that to the lads before they went out. We knew it was very important to come off the pitch knowing we’d given everything and we’ve created a little bit of history tonight beating Leeds at Valley Parade for the first time in eighty years.

Those fans have gone away tonight knowing we did everything to make that happen for them, we have had some good chances before they scored and their ‘keeper has had to pull off some decent saves. It’s never easy when the opposition go down to ten men. We couldn’t quite get that first goal and got hit by a sucker-punch ourselves, but the response was top class.”