Bradford City welcomed manager-less Port Vale to the Coral Windows Stadium to face a City team who had lose three out of the last four games at Valley Parade.

Vale’s caretaker manager Rob Page had won his first game in charge after taking over from Micky Adams and the former Coventry City centre back had his team well organised as he looked to extend his unbeaten start as manager.

Port Vale had the first effort at goal after just six minutes when Michael O’Connor hit a twenty-five yard free-kick that went just over the top of Jordan Pickford’s goal.  A minute later Louis Dodds hit a shot from just outside the City area, but his effort was well blocked by Stephen Darby.

Billy Clarke had Bradford’s first effort at goal on eight minutes when worked his way into the Port Vale area, before hitting a left-foot shot which curled wide of Chris Neal’s far post.

Vale took the lead from the penalty spot on twelve minutes through former Sheffield Wednesday midfielder Chris Lines.  A Louis Dodds shout hit the arm of Rory McArdle inside the area and referee Mr Stockbridge harshly pointed to the spot.  Chris Lines stepped up and sent Jordan Pickford the wrong way to take a 1-0 lead.

The referee was involved in more controversy on twenty minutes when he turned down a City penalty after Gary Liddle had gone down under a challenge from Carl Dickinson. However the referee awarded a free-kick on the edge of the box, when on second viewing the could was just inside the area.

On forty-two minutes, Billy Clarke was fouled around twenty-five yards from goal which gave Christopher Routis a chance to take the resulting free-kick, but his effort curled over the wall and just wide of the Port Vale goal.

The first half finished on a high for City as three minutes into injury time following a Richard Duffy foul, Mark Yeates curled a thirty yard free-kick into the top left-hand corner of Chris Neal goal to make the half-time score 1-1.

Mark Yeates went close again at the start of the second half, after linking up well with Billy Clarke he fired a shot from a tight angle which the Vale keeper pushed wide into the side netting, however referee Sebastien Stockbridge award a goal kick much to the frustration of the Irishman.

Billy Clarke then saw an effort of his own go just wide of the far corner; Knott’s through ball picked out Mark Yeates in the area and he squared the ball to Clarke who turned and hit a shot inches wide of the bottom corner.

City looked to be in the ascendancy in the game and it was Gary Liddle who was next to attempt to get on the score sheet.  After picking up the ball, he moved forward into space before hitting a thunderous shot towards goal from twenty-five yards out that was pushed over the bar by Chris Neal.

Chris Birchall then went close for Vale with his first touch of the ball after coming on as a substitute, he headed the ball against the near post after connecting with Mark Marshall’s cross into the box. 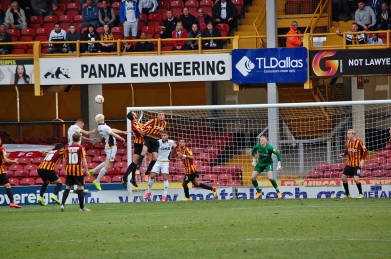 City did look the more likely of the two sides to get a winning goal, Mark Yeates tried to repeat his free kick act late on with another twenty-five  yard attempt but his effort went a yard over the Port Vale crossbar, making the final score 1-1. 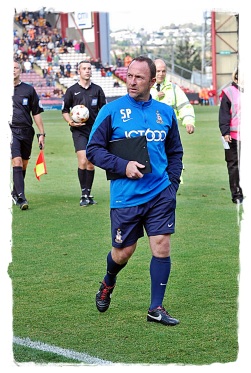 Speaking after the match assistant manager Steve Parkin said, “It’s always a difficult game against Mick Adams teams, they are a very physical side and I thought we managed it well. We are disappointed not to get three points and disappointed by the decisions from the match officials.”