Bradford City arrived at Deepdale to take on an in form Preston North End knowing that their Lancashire opponents currently occupied an automatic promotion spot and were unbeaten so far this calendar year at home.

City made three changes to the side that won at FC Halifax in the Cup with Rory Mcardle, Billy Clarke and Jordan Pickford all returning to the starting eleven, in place of Billy Knott, Ben Williams and Alan Sheehan who all dropped to the bench. 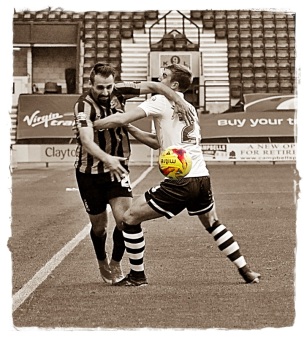 In a fairly even game it was Bradford who had the first attempt on goal after only five minutes, when Billy Clarke’s ball over the top found Jon Stead in behind the Preston defence, but Stead’s first time shot from outside the area on the half-volley sailed over Jamie Jones’ crossbar.

Preston then went close on thirteen minutes as Joe Garner wriggled his way into shooting position just inside the City area, but his goal-bound shot was blocked by the outstretched leg of Rory McArdle.

On sixteen minutes after collecting the ball from Andy Halliday, Clarke moved into space before hitting a low angled drive with his left-foot from just outside the box, which went wide of Jones’ far post.

Rory McArdle gives City the lead on twenty-six minutes following a Halliday corner, McArdle jumps the highest to head the ball past Jones in the Preston goal via the far post. 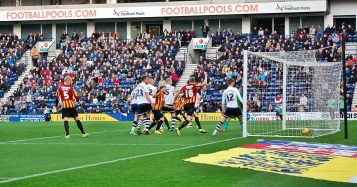 On the half hour mark Preston were unlucky not to equalise when Paul Gallagher’s low free-kick from just outside the area was deflected wide of Pickford’s near post for a corner. From the resulting corner Paul Gallagher sent over a teasing cross which was headed away by McArdle, before Neil Kilkenny’s strike inside the area is also blocked.

City had the final chance of the half on thirty-eight minutes when following a Halliday corner, Andrew Davies sent a looping header towards goal which was cleared off the line Tom Clarke to make the half-time score 1-0 to City.

Preston started the second half on top and should have drawn level on fifty-one minutes when Callum Robinson crossed into the area for Joe Garner to head at goal, but his attempt was cleared off the line by Stephen Darby.  Chris Humphrey’s got to the rebound first and hit a shot at goal which was pushed behind by Pickford.

North End continued to press and on fifty-eight minutes Chris Humphrey’s hung up a cross to the back post, which was headed back across goal by Joe Garner, but Jordan Pickford is able to pluck the ball out of the air ahead of an on-rushing Kilkenny.

A minute later Stephen Darby crossed into the penalty area for John Stead but his header from round about 8 yards went wide of the Jones’ goal.  Filipe Morais then drove into the Preston area on seventy-one minutes but his left-foot shot fizzed wide of the preston goal.

City should have extended their lead on eighty minutes when JohnStead was denied by Jamie Jones from close range tight angled shot deep inside the box, after the striker had latched onto a James Hanson flick on from a Pickford goal-kick.

On eighty-three minutes Callum Robinson fizzes a ball across the six yard box which looks set to be tapped in by Joe Garner at the far post, but Stephen Darby does brilliantly to get himself between the ball and the striker to turn it over for a corner.

Two minutes later, another excellent low cross from Robinson into the six yard box beats the City back-four and Joe Garner taps the ball passed Pickford to make the score 1-1.

Unbelievably, City regain the lead straight from the kick-off when Filipe Morais sends a cross field ball to Mark Yeates who from outside the Preston penalty area curls a shot past Jamie Jones into the far bottom corner to put Bradford 2-1 in front. 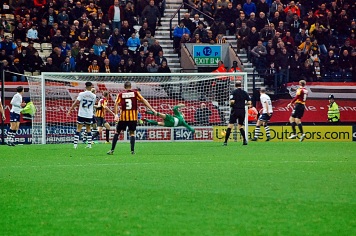 Despite the five minutes of injury time and two excellent crosses from Kyel Reid to Joe Garner in the area, City held on to win the game 2-1 and bring an end to North Ends unbeaten home run.

Speaking after the match manager Phil Parkinson said, “We started with real intent today, I spoken to the lads and told them that we were going to come here and be positive. If you come to Preston and sit back, they have some quality players who will hurt you.

Right from the start of the game, however, we were closing them down, winning corners, getting crosses in. We were perhaps unlucky not to get a second goal in that first half period.

When Preston got the equaliser, it was a low moment, but it didn’t last long because Mark Yeates has then produced a moment of magic.  In games like this, you need your big players to produce big moments and Yeates certainly did that for us today.

We’ve had no midweek matches recently so we have been able to get some good work done on the training ground. The lads have really been buying into it and I think that has been shown in the performances.”