Bradford City welcomed Lancashire rivals Rochdale to the Coral Windows Stadium as the Bantams looked to extend their unbeaten run of ten games.  The biggest talking point of the afternoon was the performance of referee Gavin Ward, who had an absolute nightmare and cost City the match.

Mr Ward’s first big decision came on ten minutes when he awarded Rochdale a penalty for a foul on Matty Done by City goalkeeper Jordan Pickford.  The big talking point came as referee Ward gave Pickford a straight red card, when Done was running away from goal and there were two City defenders covering the goal.

Rochdale’s Ian Henderson stepped up to take the resulting penalty, but his little chip down the centre of the goal hit the crossbar and the rebound fell to Peter Vincenti who smashed the ball passed replacement goalkeeper Ben Williams to give Rochdale a 1-0 lead. 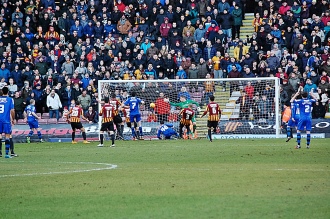 Despite being down to ten men, Bradford continued to have the better of the game, on twenty-one minutes following an Alan Sheehan corner City went close to drawing level, as Rory McArdle headed the ball back to Gary Liddle, but from eight yards his shot was deflected over for another corner.

City got back on level terms after thirty-one minutes, when Filipe Morais crossed to the back post for James Hanson to head the ball back to Alan Sheehan, who in turn headed the ball into the six yard box for Jon Stead to head the ball passed Lillis to make the score 1-1. 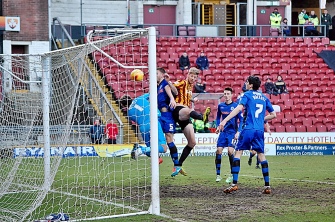 On thirty-seven minutes, James Hanson feed the ball into the path of Jon Stead but the strikers left-footed drive from outside the box deflected wide for a corner.

Just before half-time, Billy Knott latched onto a loose pass from Scott Tanser before firing in a low drive from just outside the area that whistles narrowly wide of Josh Lillis’ near post, to make the half-time score 1-1.

City almost extended their lead straight from the kick-off when a Filipe Morais cross found the head of James Hanson, but the striker sent his header just over the Rochdale crossbar from around seven yards out.

After seeing his initial cross blocked by Filipe Morais, Rochdale’s Matty Done fired a low drive from an angle inside the area which flashed narrowly wide of Ben Williams’ far post, just missing the lurking Ian Henderson in the process.

Just after the hour mark Rochdale’s Matty Done fouled Filipe Morais and from the resulting Alan Sheehan free-kick, RoryMcArdle flung himself at the ball trying to connect with a diving header. The defender narrowly misses out on connect, however and ball flew into the chest of Josh Lillis.

Rochdale took the lead with virtually the last kick of the game, as Michael Rose’s free-kick from deep into the City area eventually drops to Calvin Andrew and the striker’s looping header from around six yards out nestles into the far corner.

This was Mr Ward’s second big decision as a second Rochdale player was clearly in an off-side position and in the line of sight of Ben Williams in the Bradford City goal, therefore the goal should have been disallowed for off-side.

Speaking after the match manager Phil Parkinson said: “It was an excellent display from the boys today, we started the game really well and then Jordan Pickford got sent off which changed the whole look of the match.

Even after conceding the goal from the penalty we kept going in a really positive fashion. After getting the goal back, I felt we had the better of the second half and probably created the best chances to win it.

Overall, it was a magnificent effort from the lads and I am so disappointed that we haven’t got a point, at least, from the game.  Sometimes you don’t get what you deserve.

We said before the game that if Rochdale were to take our unbeaten run away from us, they would have to really earn it, and they have had to do that even with eleven versus ten for so long.

We will take the positives from today and bring them into what is a massive game for us on Wednesday.  We are all very disappointed and it was a very quiet dressing room, but we will come into the training ground on Monday and be very positive.”