The FA Cup returned to the Coral Windows Stadium this afternoon for a Quarter-Final encounter against Reading Football Club with a place at Wembley available for the winners in the Semi-Finals.

It will have been a day of mixed emotions for the City manager Phil Parkinson, who spent ten years as a player with the Royals between 1992 & 2003 making 361 appearances.  He was also voted Reading’s best central midfield player of all time with 60% of the vote.

This was a fairly even game with not many clear cut chances on goal, in the opening ten minutes there were a number of strong challenges with broke play up every few minutes for free-kicks and an injury to Gary Liddle.

Reading went close to taking the lead on twenty-eight minutes, when Jamie Mackie pulled the ball back from the byline to Pavel Pogrebnyak inside the area, but the giant Russian’s shot on the turn crashed against Ben Williams’ far post. 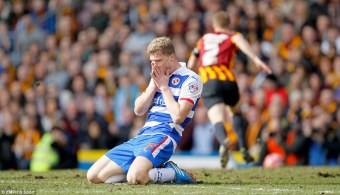 Hal Robson-Kanu’s ball into the box seconds later eventually dropped into the path of Danny Williams, but his drive on the half-volley from outside the box was blocked by the head of Rory McArdle.

On thirty-seven minutes, Gary Liddle’s in-swinging cross from the left wing was missed by the diving frame of Andrew Davies in the middle of the penalty area, before his cross bounced off Adam Federici’s far post.

The final effort of the half came on forty-two minutes when Danny Williams tried his luck from thirty yards, but the American’s drive went just over Ben Williams’ crossbar leaving the half-time score 0-0.

At the start of the second half, City went close after when a James Hanson teasing cross into the area eventually dropped into the path of Morais at the far post.

The Portuguese winger’s cross-come-shot from the six yard box was scuffed and a combination of Jordan Obita and Adam Federici manage to clear the danger. 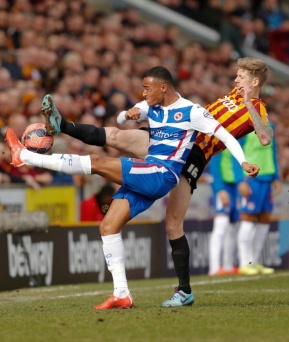 Great defending from Stephen Kelly denies Jon Stead a clear sight of goal, Stead latched onto a Billy Clarke lofted pass before driving into the Reading area.  He knocked the ball past Alex Pearce to get a strike at Federici’s goal.  Just as stead was about to shoot at goal, Kelly sticks out a leg to nick the ball off Stead’s toes and out for a corner.

Bradford’s best chance of the match came on seventy-one minutes as JonStead’s low cross into the area found James Hanson lurking at the front post, but the forward’s first time effort on the stretch went just wide of Federici’s near post.

A minutes later, Andrew Davies nearly scored for the Bantams following a Filipe Morais free-kick from wing that found Davies inside the area, but the defenders powerful header went narrowly over the crossbar.

The final effort of the game fell to Reading on the eighty-six minutes, Oliver Norwood’s wide free-kick from just outside the area towards the far post causes some moments of panic in the City defence as it came back off the post.

Three times Reading try to scramble the ball into the City goal, however the dropped to Yakubu who was eventually flagged for offside and the game finished 0-0 with a replay at Reading on the 16th March 2015.

Speaking after the match manager Phil Parkinson said, “We’re still in the hat so we’re pleased, you have to give Reading credit they made it difficult for us in what was a cagey affair. I thought our lads did excellently in a different type of way than against Sunderland.

The lads had to be very professional and wait for the moment to arrive.  Unfortunately for us it didn’t arrive today.  In the second half we had the momentum but we didn’t have that touch of class in and around the box.

We are looking forward to the replay, everyone will be expecting Reading to win that one at home, but you never know what can happen on the night.  We know they’ll approach it differently down there and look to open us up so we have to be ready for them.”