Skipton Town Ladies entertained second place Farsley Reserves at the Deman Stadium this weekend in the final league game of the 2014/15 season.

In a fairly even game, it was Farsley Reserves who slightly edged the first fifteen minutes of the game, however they were restricted to long-range shots at the Skipton goal, which were always high over the crossbar. 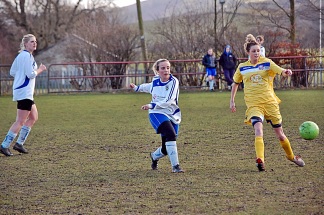 Despite the excellent defending from Skipton it was Farsley who took the lead after twenty-four minutes, when a long ball over the top of the Skipton defence fell to the Farsley centre-forward who slotted it passed Georgia Midgley from inside the area.

Around the half hour mark, Jessica Ball collected the ball at the edge of her own penalty area before riding three strong challenges on a run which took her into the Farsley area only to see her cross deflected out for a corner.

The run from Ball seemed to bring Skipton back to life and for the final fifteen minutes of the half it was all Skipton, they controlled the ball from midfield with some excellent passing and movement.

On forty minutes, Skipton Town drew level following an excellent run by Natalie Blinks from midfield, Blinks then found Leanne Farrell who went to the byline before sending over a cross, which fell to Hannah Crosdale at the back post to tap the ball home from five yards.

The second half turned into a bit of a midfield battle with Skipton Town coming out on top.  However despite all their efforts they couldn’t force a second goal. Women of Match Hannah Crosdale controlled the second half with some excellent touches, great passing and some fantastic runs deep into the Farsley half. 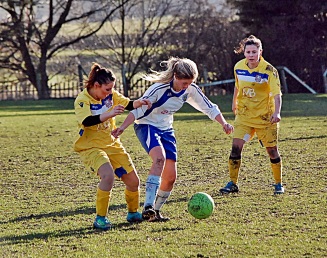 Farsley took the lead for the second time in the sixty-fifth minute, when their centre-forward bet the Skipton defence to slot the ball passed Midgley from about eight yards to give them a 2-1 lead.

Skipton continued to press forward through Crosdale in the final ten minutes of the game and had a couple of chances to draw level, the first fell to Crosdale who had out run the Farsley defence down the left-wing, but her final shot was rushed and the ball screwed wide for a goal-kick. 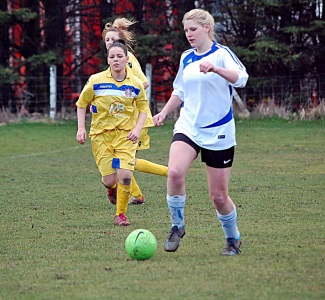 The second chance fell to Lisa Dawson at the edge of the box following a Skipton corner, but her effort was well saved by the Farsley goalkeeper.  About five minutes before the end Skipton lost Jessica Ball through injury and Farsley Reserves managed to hold on for the 2-1 victory.

Skipton Town Ladies finish the season in seventh position in the league and its fair to say that they have continued to improve season on season.  The club has this week been discussing a link with the junior girls teams.

The link will allow players to progress through the ranks of Junior football into the ladies squad, which will not only benefit the ladies team but will also improve women’s football in the Skipton area.