McMahon Join On Loan From Blackpool

Bradford City have today confirmed that Tony McMahon has joined the club on loan from Championship side Blackpool, versatile McMahon will assist the Bantams ahead of their final ten league games of the season.

McMahon, who turned 29 on Tuesday, has played 33 times for the Tangerines this season in the Championship.  He is the third player to move to the Coral Windows Stadium from Bloomfield Road following similar loan moves for Gary MacKenzie and Francois Zoko. 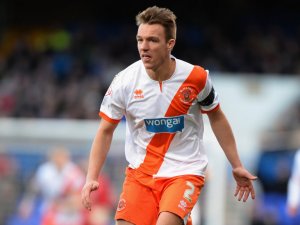 McMahon, who has captained Blackpool on numerous occasions this season, can feature in a number of positions on the pitch including right back, centre back and central midfield. He is also handy at dead-ball situations and has a number of goals and assists to his name from set-pieces.

Having come through the ranks at Middlesbrough, McMahon featured in the same youth team as Andrew Davies, Gary Liddle and Jason Kennedy that reached the F.A Youth Cup Final two years on the trot during the early 2000’s.

Along with a large number of appearances under his belt at domestic level, McMahon has also been capped internationally with England at Under 16, Under 17 and Under 19 level.