When something like the death of Danny Jones hits the world of sport, the first thing everyone thinks of is the player and his or her family, as they should do of course.

However, I would like to pass on a message to Keighley Cougars Chairman Gary Fawcett, the board, players, staff and supporters of the club.  The way the club have conducted themselves and handled what will be the toughest two weeks in the club’s history has been FANTASTIC.

The club has revealed that they will honour the remainder of half-back Danny Jones’s contract, with all payments going directly to the fundraising efforts to support his young family.

Jones collapsed and died on 3 May after suffering a cardiac arrest during Keighley’s game against London Skolars, despite extensive efforts to resuscitate him.

A fundraising page was immediately set up by the Rugby Football League’s Benevolent Fund to attempt to raise money in order to support his wife Lizzie and their five-month-old twins, Bobby and Phoebe. 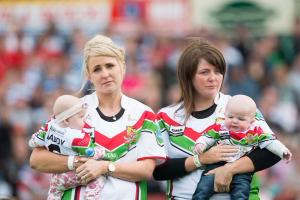 Over £113,000 has now been raised in little over a week, with over 4,000 people packing into their Cougar Park stadium for a game against Coventry Bears at the weekend, way over the average crowd of just over 700 in 2015.

Now the West Yorkshire club have confirmed that the money Jones would have earned for the remainder of his contract, which runs until the end of the current season, will be ploughed directly into that fund. The move will also enable Gift Aid from the club’s directors to be added into the fundraising total.

Keighley have also confirmed that they are awaiting payments for match day sales on Sunday to be added to that fund – which is expected to see it shoot towards the £150,000 mark. The Keighley chairman, Gary Fawcett, has stated he wants to raise £1m before the end of the season.

The news comes on the day that Jones’s wife requested that all monies raised for the family of Danny to be put into a special trust fund for their twins. The family have said that they want to help protect Phoebe and Bobby’s future using Danny’s legacy. 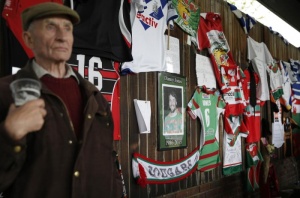 Lizzie Jones said: “We are totally overwhelmed by ordinary people’s generosity in supporting us.  These are the most difficult times and our family find great comfort from our wider rugby league family.

Danny loved playing rugby league and Keighley Cougars have been fantastic and we are grateful for the rugby league support which we have received from around the world. Thank you all very much.”

The funeral details for Welsh international Jones, has been confirmed and it will take place on 22nd May 2015 in Jones’s hometown of Halifax.  Danny’s wife said, “We want people to come in their rugby jerseys and wear bright colours to remember his wonderful fun personality.”