Bradford City have today confirmed that Tony McMahon will return to the Coral Windows Stadium on a permanent deal after leaving Blackpool at the end of last season.  A versatile player McMahon finished last season on loan at Bradford City. 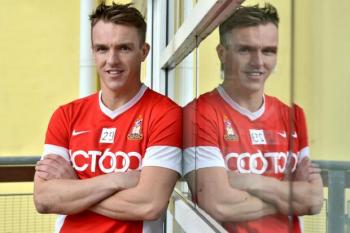 He becomes the third summer signing for Phil Parkinson, after signing his contract this morning at Apperley Bridge, where he signed a two year deal.

McMahon has been capped at England U16, U17 & U19 level, has also played in the Premier League on a number of occasions with Middlesbrough.

After completing the deal McMahon said, “I really enjoyed myself on loan at the club towards the end of last season, but I know I still have to work hard and try to impress like all new signings.

I had a chat with the manager at the end of last season and he was saying that he wanted me to stay at the club, I’m glad the move is all completed now and I can get ready for the season ahead.  The manager has put his faith in me and I want to repay him.

Everyone knows about the size of the club, the fan base, the number of season tickets sold (over 16,000) and I want to try and be part of something special.  There is a great set of lads at the club and the stick together with the staff which is what played a part in me deciding to come back to the club.”

McMahon can play either at right-back or in central midfield, he featured eight times for City at the back end of last season, scoring once in the Good Friday match against Doncaster Rovers.