Bradford City began their pre-season preparations with a 3-0 victory against local non-league side Farsley Celtic at a busy Throstle Nest.

It was City who started the stronger of the two side and they went close on ten minutes following a clearance from Ben Williams which was flicked on by trialist Sanchez Watt, his header found James Hanson, who saw his half-volley from the edge of the box well saved by Thomas Taylor. 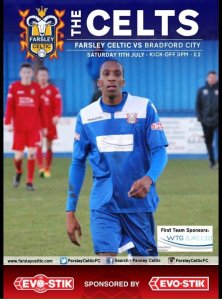 Moments later Josh Morris surged past four Farsley players before crashing a raising drive from just inside the area against the Farsley crossbar with Taylor well beaten.

Farsley’s first attempt of the afternoon came from the boot of Lewis Nightingale but the midfielder, who works as a youth team coach for Bradford City, fired his shot well over Williams crossbar.

Nine minutes later the game was over as City added a third goal on thirty-six minutes, Luke Hendrie’s low cross into the box wasn’t dealt with by Thomas Taylor and Sanchez Watt smashed the loose ball into the empty net to make it 3-0. 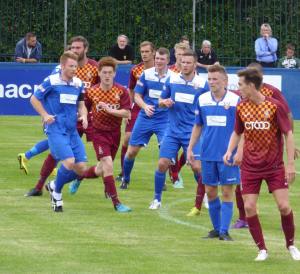 In the final five minutes of the first-half, James Hanson had to two excellent opportunities to score his hat-trick but his first effort when narrowly wide of the post, his second effort was well saved by Taylor in the Farsley goal.

As execpted Phil Parkinson made evelen changes at half-time and two of the substitues Christopher Rouris and Tony McMahon combined in the first minute, as the Frenchman’s volley from inside the area was well saved by Farsley’s new goalkeeper Jake Lofthouse. 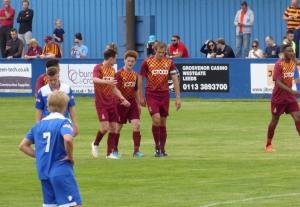 With all the changes at half-time the game had a lot less goal mouth action in the second half, however Tony McMahon did have to excellent efforts at goal from the edge of the Farsley area which were both well saved by Lofthouse.

Farsley midfielder Rhys Jenkinson (a former Bantams apprentice) did warmer the hands of Bantams goalkeeper Joe Cracknell just before the full-time whistle, as Bradford kept hold of their clean sheet.