Burnley Football Club have today confirmed the signing of Tendayi Darikwa from Sky Bet League One side Chesterfield for an undisclosed fee.  The highly rated full-back has signed a three-year-deal, with a further year’s option in the club’s favour.

Darikwa made 56 appearances in all competitions as Chesterfield reached the League One Play-Off semi-finals, where they lost out to eventual winners Preston North End.  At the end of the season awards, Darikwa picked up four gongs including the Player of the Year and Players’ Player of the Season.

Speaking about the signing Burnley manager Sean Dyche said, “We are delighted to add Tendayi to the squad. He is someone we have had our eye on for a while and after playing against Chesterfield last weekend, his performance confirmed our thoughts and made the decision for us.

He is definitely one who can push for a place in the team now, but also one for the future because we are confident we can improve him as a player because he has a great desire to learn.” 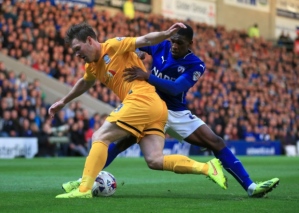 The Clarets beat off strong competition for the Nottingham-born defender, who started his career at Chesterfield and penned his first professional contract in 2010.  After making his debut in the same year against Burton Albion in the FA Cup, Darikwa began to establish himself as a first-team regular at the Proact Stadium.

He was an integral part of the Spireites side that won the League Two title in the 2013/14 campaign, after being converted from a right winger to a right back by former boss John Sheridan.