The twenty year old former Manchester United and Derby County player has spent the last two years at Pride Park, will join the Clarets’ Development Squad for the coming season.

Luke is the son of former Middlesbrough and Bradford City winger John Hendrie, he is a former England U16 & U17 international is delighted to have joined a club that he feels has the infrastructure of a Premier League side. 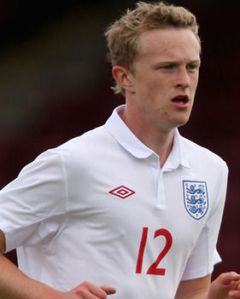 After signing his contract Luke Hendrie said, “I’m happy it’s all done, it’s been a strange couple of days but I’m happy to get started and hopefully I can have a good season.

I was here last week on the bench for Bradford City while on trial, so it was a bit surreal to be back today as nobody really knew I was here on Saturday.  It gave me an early taste of the place and it’s a really nice stadium and it’s got the feel of a Premier League club.

I was at the training ground today and the facilities are brilliant, but they are also improving further so it can only help my development.  I felt it was time for me to move on from Derby were I have been for two years, this opportunity came up and it was hard to turn down.

I just want to keep my head down, look to improve and learn from the more experienced players.  Hopefully it will be a good season for the football club.”