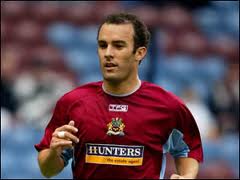 Graham Branch was born in Liverpool on the 12th February 1972, he started his career as a trainee with Tranmere Rovers he made 109 appearances for the club scoring 10 goals.

Whilst at Tranmere Rovers, Branch had two loan spells away from Prenton Park at Bury and Wigan Athletic before being released by club at the end of the 1997-98 season.

After being released by Tranmere Rovers, Graham joined Stockport County at the start of the 1998-99 season, but after making just 14 appearances in six months he was signed by Stan Ternent at Burnley in January 1999.

Once described by Ternent as a Premiership standard player, Branch played in a number of positions for the Clarets including Left Wing, Left Back, Centre-Half and Striker. The supporters also gave him the nickname of “Graham di Branchio.”

Branch was released at the end of his testimonial season in 2007 by then manager Steve Cotterill after making 264 appearances for the club.  However Cotterill handled the situation poorly releasing the information in interviews just before Branch’s testimonial game.

After leaving Turf Moor, Branch signed for Accrington Stanley for one season before dropping into the non-league with Cammell Laird and Colwyn Bay, before he was forced to retire after suffering a serious eye injury.

Who was your biggest influence in football?

There has been two big influence on my career the first was Ray Mathuis at Tranmere Rovers and the second is the ‘Gaffer” Stan Ternent at Burnley Football Club.

What is your best football highlight?

There have been a number of highlights, signing my first contract as a professional with Tranmere Rovers, also winning player of the year whilst at Burnley. Plus there are 2 goals the first was against Portsmouth for Tranmere and the second was a Burnley goal against Derby, which kept us up.

What is your football lowlight?

My biggest low in football was being released by Burnley Football Club, plus the way in which the then manager Steve Cotterill handled the situation.

Playing for Tranmere Rovers away at Middlesbrough.

My second goal against Portsmouth, which received Goal of the month from Chris Kamara.

Who is the best manager you have played for and why?

Stan Ternant because he is the ‘gaffer’ I have huge respect for him and he would do anything for you, plus he made me the club captain at Burnley.

Who was the best player you played with and why?

Simple, Paul Gascoigne even though he was never the player he used to be when he was at Burnley. He was my idol.

How has the game changed from when you started your career?

There is a lot more diving going on for sure, there is also a lot more money involved in the game now for the players and the transfer fees. Everyone is a bitch they cannot keep their opinions to themselves.