Bradford City have confirmed their second second loan signing of the day after signing midfielder Lee Evans from Championship side Wolverhampton Wanderers. 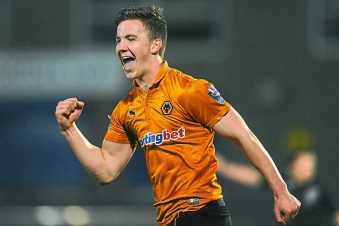 Evans, 21, has penned a loan deal with City which will keep him at the Coral Windows Stadium until the 9th January 2016.  Evans will now come into contention for City’s Yorkshire derby at Barnsley this Saturday.

Born in Newport, Evans is a current Welsh international at Under 21 level. Evans has also been called up to the Wales senior side in the past but he has yet to feature for Chris Coleman.

Evans played 18 times in the Championship for Wolves last season. The midfielder also played a significant role in the Wolverhampton side the won the League 1 title back in 2013/2014 season.

The 6′ 1” midfielder began his career with home-town club Newport County before moving to Wolves aged only 18 for a fee believed to be in the region of £200,000.

During his time at Newport, Evans helped the Welsh side earn promotion back in the Football League at the end of the 2012/2013 season.