Its been a difficult week at the Shay, following the 2-1 defeat to Guiseley on Tuesday evening, FC Halifax took the decision to sack manager Neil Aspin after six years in charge.

The club have installed chief scout Gareth McClelland as caretaker manager, whilst the search for the new manager starts, McClelland welcomed fellow strugglers and former football league side Southport to the Shay for his first game in charge at the club.

Southport manager Paul Carden has every reason to feel disappointed after his side were robbed of all three points, due to poor decisions made by referee Simon Bennett.  It was a fairly even first twenty five minutes, as both teams tried hard to win the midfield battle.

FC Halifax Town had the first shot of the afternoon when the ball fell to Connor Hughes, but his powerful shot from the edge of the box was well saved by Andy Coughlin in the Southport goal.

The first main talking point of the game came after twenty-four minutes, as Southport winger Mike Phenix went into a challenge two footed with FC Halifax player Connor Hughes and he was shown a straight red card. 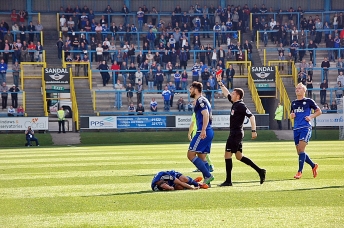 Southport changed their formation after the red card to a 4-4-1, the new system put the visitors in control of the game and just ten minutes they took the lead as Matty Brown put the ball past his own keeper, following an excellent cross by Louis Almond. 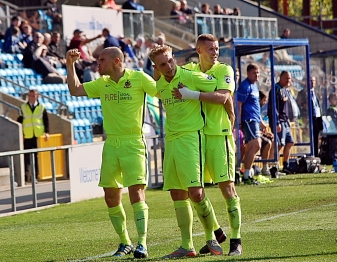 On forty minutes, Sean Tuton had a header well saved by Andy Coughlin, following an excellent cross by Jake Hibbs.  FC Halifax had the final effort of the half, five minutes later when James Bolton’s left footed shot went over the Southport crossbar, to make the half-time score 1-0.

The second half started in much the same way as the first half finished with Southport’s ten men on top and controlling the game, FC Halifax could only get one header at on target in the first twenty minutes of the second half.

On sixty-six minutes, Cole Stockton added a second goal for the ten men, as Matty Challoner cut inside the area before sending the ball across the six yard box for Stockton to side foot the ball past Matt Glennon at the front post to make it 2-0.

The game then changed eight minutes later, when referee Simon Bennett awarded Halifax a penalty following a linesman flag, the decision was a shocker as Josh Thompson clearly takes the ball and not the man and FC Halifax take full advantage as Burrow scores the penalty to make it 1-2. 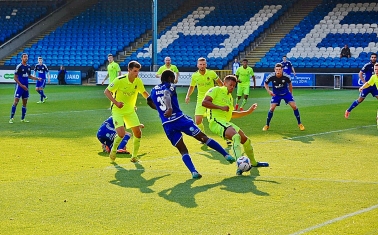 FC Halifax were now on top and looking to get their second goal of the game, Jordan Burrow went close on eighty-six minutes when his header from the middle of the Southport box went over the crossbar.

Two minutes later, Jordan Burrow broke Southport hearts as he flicked on a corner to the back post and his header found the far corner of the goal, to make the final score 2-2.

Gareth McClelland most now get the team focused for the visit of promotion challengers Gateshead to the Shay on Tuesday evening.