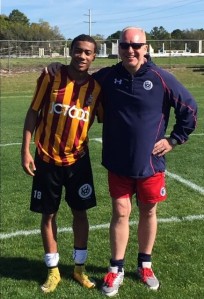 The American forward could now be in line to make his debut away at Presot Cables this Saturday.  After signing a two-year contract with the club back in the summer, Lewis has featured in all three of City’s reserves’ matches so far this season.

The young striker has yet to be included in one of Phil Parkinson’s match-day squads this campaign, however, so it is hoped Lewis’ loan to Farsley will give him an opportunity for first team football.