Sean Dyche and his in form Burnley side arrived at Molineux Stadium having only lost once in the last twelve games, picking up seventeen points from a possible twenty-one, while Wolves remain out of form having now won only once in six games.

It was the visitors who started the game the strong of the two sides and the Clarets had the first effort on goal after only thirty-eight seconds, when Scott Arfield hit a right footed shot from outside the box which was saved by Martinez in the Wolves goal.

In the second minute the Clarets went close again following an excellent pass by George Boyd it was Andre Gray who sent a right footed shot from outside the box, which was again well saved by Martinez.

Sam Vokes was the next player to have a shot at Wolves goal on fifteen minutes, but his effort was well blocked by the Wolves defender Mike Williamson.  Five minutes later a Vokes headed pass found Andre Gray in the middle of the Wolves area, but his shot was again well saved by Martinez in the Wolves goal.

Wolves first shot of the game came on twenty-five minutes when Danny Batth found Benik Afobe, but his right footed shot from a difficult angle was well saved by Tom Heaton towards the top right-hand corner of his goal. 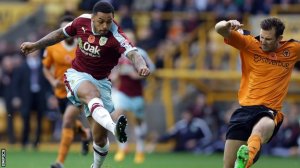 It was Wolves who finished the half the stronger as James Henry had the final shot of the half, his left footed shot from outside the box went just wide of the Heaton’s left hand post to leave the half-time score 0-0.

The second half started with Wolves on the attack as Sheyi Ojo had a left footed shot from outside the box that went over Heaton’s crossbar, after an excellent pass by Dave Edwards. 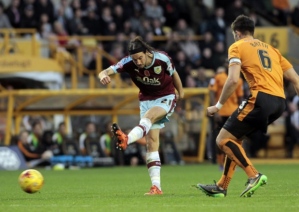 On fifty-two minutes following an excellent pass from Andre Gray, it was George Boyd who hit a left footed shot from outside the Wolves area which went just passed the Wolves right-hand post.

Wolves should have taken the lead on sixty-seven minutes when Benik Afobe had a clear header at goal from the centre of the area, but his header went wide of Heaton’s left post. 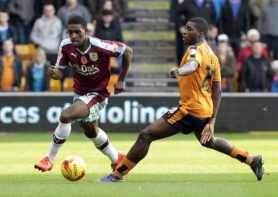 In the final ten minutes, Wolves increased the pressure on the Burnley goal as they looked for a winner.  On eight-two minutes Dave Edwards went close with an excellent right footed shot after Afobe had headed the ball back across the box.

In the last five minutes, Benik Afobe had two more chances in front of goal, the first shot went wide of Tom Heaton’s right-hand post and the second effort on eighty-six minutes also went just wide of the right-hand post, to leave the final score 0-0. 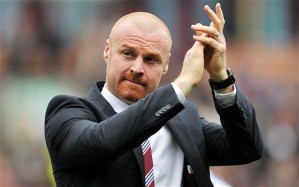 Speaking after the match Burnley manager Sean Dyche said, “As the game wore on we didn’t really create the chances, but I think the pitch for both sides was heavy.  It was the third game in a week for both sides and that can play a part.

In that first half we played quite well and in the second we were a bit patchy.  Wolves built some momentum, but I don’t think Tom Heaton was unduly worked and we go away with a point from what still is a tough place.

Yet again we have found a way of getting another result and a clean sheet and I think we deserved it.  Some of our defending late on, when they were giving everything for the shirt and the cause, was fantastic.

Now we have good momentum and we’ve put a lot in recent weeks. We’ll be putting some work in early next week and then the lads will have some time off so that we are ready to go again.”

The draw was the first in 15 league meetings between the two sides at Molineux since August 1976.  Sean Dyche and his team can now look forward to a top of the table clash against Brighton Hove Albion after the international break.