Bradford City have today confirmed that young striker Reece Webb-Foster has been handed a professional contract by the football club.  Webb-Foster, signed his maiden professional deal at the Coral Windows Stadium alongside COO James Mason. 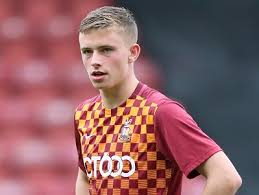 Webb-Foster, a second year scholar made his senior debut in the closing stages of the club’s Capital One Cup tie at Milton Keynes Dons last season.  He was aged only 16 years and 200 days, a mere 59 days older than the youngest player ever to play for the club Robert Cullingford.

Having netted 17 goals for City’s youth team during the 2013/2014 campaign while still registered as an under 16 player, Webb-Foster finished last season as top scorer for the under 18s, helping them to retain their Football League Youth Alliance North East Division title in the process.

Webb-Foster will wear squad number 34 for the remainder of this season.