England and Sunderland footballer Adam Johnson has today appeared in Bradford Crown Court and pleaded guilty to grooming and sexual activity with a 15-year-old girl on the first day of his trial. 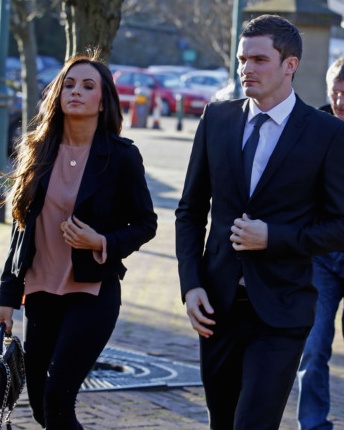 Born in Sunderland, Johnson began his career at Middlesbrough before moving to Manchester City and then to Sunderland for £10 million in 2012.  In 2006 he appeared five times for Leeds United on loan.

He appeared in the dock wearing a black suit and white shirt and was flanked by a female prison officer.  He listened carefully as the proceedings got under way as six men and six women were selected to sit on the jury.

Minutes earlier, Johnson had stood in the dock to admit his guilt on the grooming charge which relates to a period between December 30 2014 and February 26 2015 and a further charge of sexual activity on January 30, 2015 which involved kissing and touching the youngster’s body. 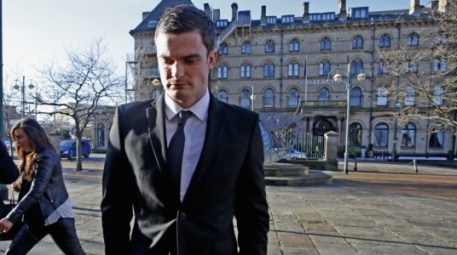 In his directions, Judge Jonathan Rose told the jurors that Johnson had already pleaded guilty to two charges.  Judge Rose added that they may read about the case in the press.

He told the jurors: “Mr Johnson, as you will hear, is a professional footballer for Sunderland Football Club. You may see reference to this in the press but it’s the evidence in court that you will gather.

This defendant has already pleaded guilty to two offences, you will hear more about them in detail when Miss Blackwell opens the case to you on Friday.  It will be for you and only you to determine if he is guilty or not guilty.”

Kate Blackwell, QC for the prosecution, said that the alleged incidents had taken place in County Durham, in or about the area of Castle Eden and Wingate.

Johnson is being represented by Mr Orlando Pownall QC. Twelve journalists were allowed into the hearing which saw a further 18 people including the footballer’s girlfriend, Stacey Flounders, who was accompanied by another woman, sat in the public gallery.

Legal argument will now take place before the case is scheduled to be formally opened on Friday.