As the three way race for the Premier League mounts, Brighton went into second place in the table with a 5-0 win on friday evening, Middlesborough added further pressure on the Clarets with a last minute winner at lunchtime against Bolton to put the Clarets third and five points off the top as they arrived at St Andrews. 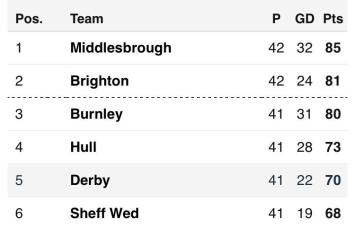 Sean Dyche was forced into two changes for the game with Sam Vokes injured and David Jones dropping to the bench, Dean Marney started in midfield .  The first ten minutes of the game was fairly even with most of the action taking place in centre of the pitch.

The first attempt at goal came on eleven minutes when Ryan Shotton header from the centre of the box wide wide of Tom Heaton’s right hand post, following an excellent cross by David Cotterill following a free kick. 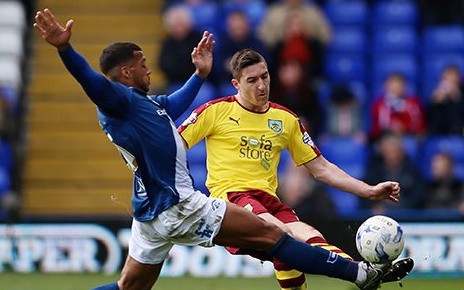 On twenty one minutes, Jacques Maghoma’s right footed shot from the centre of the box went just wide of the Clarets right hand post, he was again assisted by David Cotterill.

Ryan Shotton then had a second chance to head Birmingham in front on twenty eight minutes, but his free header from six yards was well blocked by Michael Keane.

Just three minutes later, Burnley took the lead when George Boyd’s left footed shot from the centre of the box found the bottom right corner of Legzdins goal, to give the Clarets a 1-0 lead. 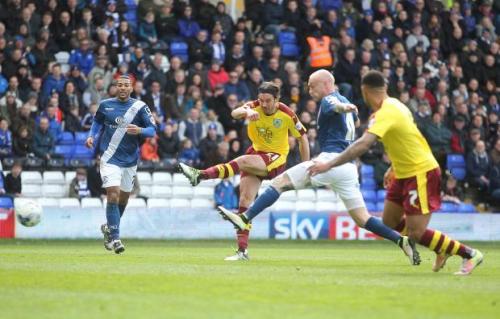 David Cotterill found some free space on thirty eight minutes and he played an excellent ball to David Davis just outside the box, his right footed shot went high and wide of the Burnley goal.

Jon-Miquel Toral then went close for Birmingham City when his header from the centre of the box was well saved by Tom Heaton, following an excellent headed pass by Maikel Kieftenbeld.

On forty three minutes, George Boyd had a left footed shot from the left hand side of City’s box, by his effort was well blocked by Caddis following an assist by Joey Barton, making the half time score 1-0.

Burnley made a change at half time replacing Joey Barton with David Jones with one eye on Tuesday title match against Middleborough.  The Clarets started the second half the stronger and had their first effort just three minutes into the half.

It was an excellent pass from George Boyd which found Andre Gray his right footed shot from a difficult angle on the right was well saved by Legzdins to his bottom right corner.

Three minutes later following a pass from George Boyd, it was David Jones who had a left footed shot from the centre of the box went close, but just missed the far right hand post.

Ashley Barnes then went close to adding a second for the Clarets following an excellent through ball from David Jones, but Barnes shot from the left side of the box went just wide of the post.

Two minutes later Birmingham City drew level when a Jon-Miquel Toral left footed shot from outside the box was parried by Tom Heaton and the rebound was headed home by Jacques Maghoma from the middle of the area, to make the score 1-1. 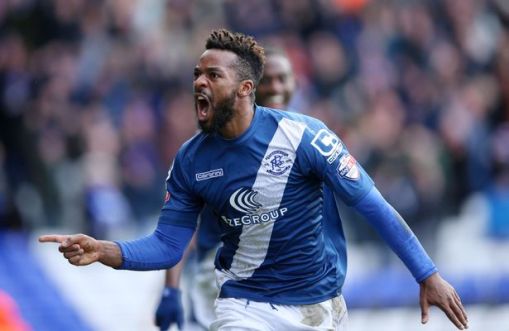 Birmingham City then had to great efforts on fifty nine minutes, the first fell to Jacques Maghoma but his right footed shot from the left side of the box was blocked by the Burnley defence.  The second effort fell to Maikel Kieftenbeld but his right footed shot from just outside the box, went just over the top left hand corner of the Burnley goal.

On seventy three minutes, Jonathan Grounds had a free header from the middle of the box but his header hits the crossbar and was cleared by the Burnley defence.

Just four minutes later, Burnley took the lead again when Lloyd Dyer run down the left wing before sending over a cross to the middle of the Birmingham area, where Andre Gray was left unmarked to volley passed the City goalkeeper to make the score 2-1. 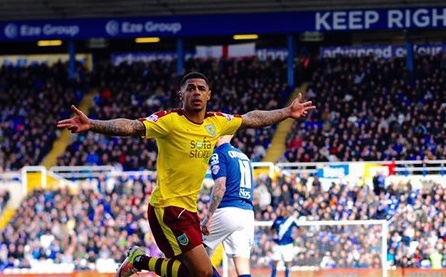 In the final minute of injury time, Jon-Miquel Toral committed a bad foul on Lloyd Dyer just on the half way line.  This lead to a red card for Toral for a second bookable offence, a minute later the game ended 2-1 to the Clarets.

Burnley now return to Turf Moor on Tuesday evening looking to extend their unbeaten run to twenty games when they entertain top of the table Middlesborough, in what looks likely  to be the Championship decider.

Speaking after the game manager Sean Dyche said, “I just think it’s important the fans know that I and my players are in this with them. I spoke about an alignment when I came here three years ago, I think there is an understanding from the fans that we will give everything.

I just felt this was an appropriate time to remind them that we have got a strong jaw. We showed that to come back from their goal and still create the chances we did and when the moment of truth came, Andre smacked it in the goal.

George Boyd was tireless in his work and his quality was outstanding, while the response of the team after they equalised was to be admired.  There is a great belief among the players and there is certainly energy and desire, we are in a good place for a reason and I was very pleased with the way we played.

This is a tough place to come but to see through all of that and handle the occasion, play the football we did and score the goals we did is terrific. Sam Vokes missed the game with a groin strain, while Joey Barton was substituted at half time with one eye on Tuesday’s home game against Middlesborough.”