Burnley arrived at Deepdale for the Lancashire derby looking to continue their twenty game unbeaten run, whilst regaining the top spot in the Sky Bet Championship in front of the Sky Sports camera’s.

Preston North End had the first effort on goal in the first minute of the match after Adam Reach beat Matthew Lowton on the left wing, his cross found Beckford on the edge of the six yard box by his header went wide of Heaton’s goal.

Burnley took the lead on six minutes after Sam Vokes was fouled about thirty yards from goal.  Joey Barton lined up the free and his effort at goal to a deflection and wrong footed Kirkland leaving the ball to run into an empty goal, to make it 1-0 to the Clarets.

Paul Gallagher then went close on fifteen minutes with a right footed shot from outside the box, but his effort went just wide of the left hand post.

The Clarets then had two efforts on in two minutes, the first fell to Andre fray on eighteen minutes following a Joey Barton free kick, but his effort went over the crossbar.  The next effort fell to Ben Mee following an excellent cross from Scott Arfield, but his header was well saved. 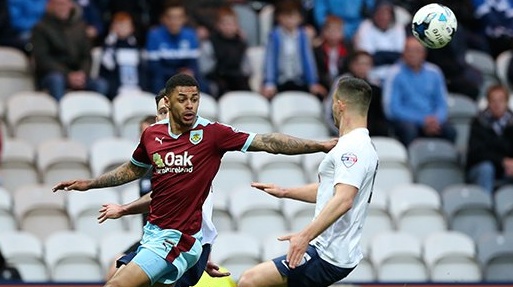 On twenty nine minutes, a floated free kick into the Preston area by Joey Barton was met by Ben Mee but his header went just wide of Chris Kirkland’s post.  A minute later Scott Arfield had a right footed shot from the edge of the box which was well saved by Chris Kirkland.

Joe Garner had the final effort of the half on forty one minutes heading a Paul Gallagher corner high and wide of Tom Heaton’s goal, to make the half time score 1-0 to Burnley.

Preston North End started the second half the stronger and on forty six minutes was met by Beckford at the edge of the Clarets six yard box, but he put his header over the crossbar.

On fifty two minutes, another free kick for a foul on Arfield was sent across the Preston area and was met by Sam Vokes, his header went just wide with Kirkland well beaten.

The Clarets were now well on top and George Boyd played an excellent ball down the right wing which found Andre Gray at the edge of the Preston area, his pass across the box found Afield who worked some room to curl a shot just wide of Kirkland’s post.

Preston had the chance to level the score on sixty nine minutes when Beckford held the ball up at the edge of the Burnley area, before laying the ball off to Johnson but his first time shot from the edge of the area was well saved by Tom Heaton.

On the ninety second minute, Joey Barton brings down Cunningham on the edge of the area, but Kevin Gallagher’s free kick hit the wall, the ball rebounded to Calum woods but his effort was well blocked by the Burnley defence.

Four minutes later, Preston’s Callum Robinson had the final effort of the game when he hit a right footed shot from the edge of the Claret area, which went just over the ball to make the final score 1-0. 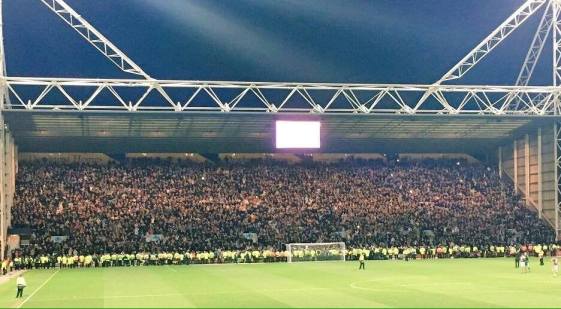 The Clarets took over 5,000 travelling supports to Deepdale as they extended their unbeaten run to twenty one games without defeat.  They have again gone back to the top of the Championship with just two game left in the season.