Together Stronger has played a crucial part in Welsh football’s recent success over the past eighteen months.  The Welsh fans, players, coaches, staff and media have been united in supporting Wales’ charge to the forefront of the game.

Each Wales supporter has their own memories about their journey as fans and how they came together to support Wales.  To build on Together Stronger, the latest Welsh player to join the English Premier League is Burnley’s Sam Vokes, who was happy to share his best and most significant Wales memories. 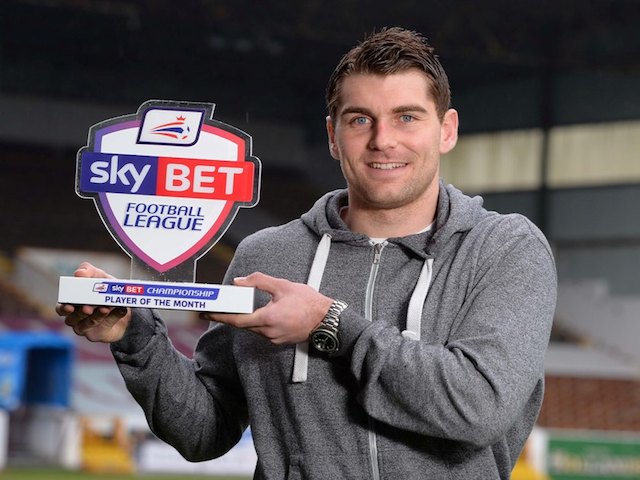 I had just broken into the first team at Bournemouth when I received my first call up for Wales at the age of just seventeen, until then I had not even been involved with the U17 or the U21 Wales squads.

Kevin Bond, my manager at Bournemouth at the time called me into his office and said Brian Flynn wants to meet you up with you at Scunthorpe, we were playing there on the Friday night.  So after the game, I met Flynny and he just came straight out and asked me if I’d like to play for Wales.

It was a massive honour to be asked because I was very keen to be involved with the national team and I got my call up soon after and started playing for the under-21s. I remember watching Wales a lot as I was growing up, it was a tough time when I was watching to be honest.

I’ll always remember the qualifying campaign for Euro 2004, when they nearly made it against Russia in the play offs, as well as those two games against Italy. But I really started to get interested in everything about Wales when I got involved with the under-21s.

I have dual nationality and qualify to play for Wales through my granddad, but playing international football wasn’t something I’d thought about before.  It had always been something I wanted to pursue further on in my career, given that I was only 17 at the time.

So it came around a bit quicker than expected but Flynny was doing that with a lot of players at the time. Quite a few of us came through from academies in England at a very young age, around the same time, so we all built up a good relationship that way and it was a brilliant experience.

The first game was an away trip to play Northern Ireland U21’s there was a lot of lads there on their first trips. I scored my first goal for the under-21s just 36 seconds after coming on as a sub, which was a record at the time. I was nervous for my first game because Giggsy was there he’d come down to meet us all so I was quite star struck but it was nice to meet him.

I made my senior team debut in May 2008, scoring my first senior goal against Azerbaijan the following Autumn, getting the winner in a 1-0 victory. That was a massive moment for me getting my first game at the Millennium Stadium whilst I was still playing for the U21’s

The majority of that U21 squad made it through to the senior team and that probably made us closer, there were so many young players there which helped us be more comfortable and then some great senior players to settle us in.

It was quite daunting to think about integrating with the senior players but they were great with us.  They made a point of making it easy for us to fit in and Craig Bellamy was a stand out personality in the dressing room so he was great for me and the younger lads to look up to and ask for advice.

Even now when we’re away from Wales, even though we might not get together that often the lads always keep in touch with each other.  There’s a good core group there that have been close and grown up together so we all keep in touch when we’re away from it. Then when we come back and meet up it’s like we’ve never left each other and we just carry on as normal which really helps us when we go into these big games, the Together Stronger tag is so true.

We’re all on the same sort of level in terms of personalities, there is a big mutual respect between all of us because we’ve been together for so long. Joe Ledley & Wayne Hennessey are nuts, they’re in their own different world and perhaps get up to mischief but most of us have grown up together and we all know how important it is to represent Wales.

My standout memory as a Wales player, apart from this most recent qualification which was absolutely fantastic, has to be that transition period from John Toshack to Gary Speed and then to Chris Coleman. The Gary Speed era was massive for Wales, it was a huge shift in terms of what we did on and off the pitch, we moved from being not too technical into a very sports science based and a very performance based set up.

A lot of things changed and there was a big reaction to that from us and the fans and it was a great time to be involved with Wales. The passing of Gary Speed was tragic and it took a while to get back but I think that period built what we are now really. Having the fans back over the last 18 months or so has made a massive difference to us.

Growing up and watching Wales in the days when they nearly qualified they were getting 50,000+ at the Millennium Stadium and we knew that’s what we wanted to play in front of.  In this last group stage that interest has come back and the centre of all of that is the Together Stronger campaign which unites us with the fans that have followed us.”