The visitors were without new manager Phil Eastwood due to a planned holiday that was booked before taking the role as Nelson manager, so his assistant Jerome Fitzgerald and first team coach Gerry Harrison took charge of the side.

The first half was a fairly even half, however Nelson slighty edged the first fifteen minutes as Patrick O’Brien ran with the ball and created a couple of efforts for Nelson.  O’Brien had a chance early in the half, but could only curl his shot just wide from the edge of the area. 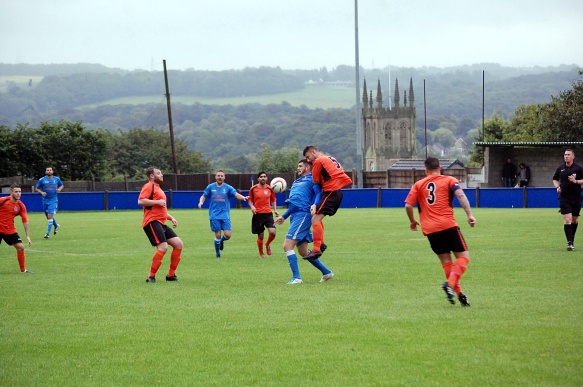 O’Brien then created a chance for himself as he went past three or four Padiham defenders into the six yard box, before firing a shot straight at Donlon in the Padiham goal who did well to turned the ball around the post for a corner.

Moments later Padiham should have taken the lead following an excellent cross field pass from full-back Brandon Barski which found Alex Murphy clean through on goal.  But just as the striker was about to shot inside the Nelson area.  Samual Charlesworth some how managed to get a toe to the ball and put it out for a corner.

On twenty minutes, another excellent run and pass by Patrick O’Brien lead to a shot from the edge of the Padiham penalty area by Zak Dale.  His first time effort was arrowing for the top corner when Donlon managed to get a hand to the ball and tip it over for a corner.

Padiham should have taken the lead on thirty minutes, following an excellent run and cross by David Hankin.  His cross cut out the Nelson back four as it ran across the six yard box.  But Aaron Taylor could only stick out a leg as he slide across the box, when a touch would have given the Storks the lead.

In the second half, Padiham were in complete control of the game with some excellent defending by the back four and great passing and tackling from the midfield players.

Padiham took the lead on the hour mark, when a corner found Marc Young in the area and his header left James in the Nelson goal with no chance, to make the score 1-0.

The Storks went close to extending their lead on seventy-five minutes, when summer signing Jordan Armstrong run the full length of the right-wing before cutting inside to the edge of the Nelson box before hitting an outstanding shot which went just over the bar.

Padiham should have scored again on eighty-two minutes, as Sean Cookson broke through the Nelson defence to leave himself one-on-one with keeper Steven James.  However the keeper made anything outstanding save to tip the ball around the post for a corner.

Two minutes later Cookson turned provider when he squared the ball to the edge of the Nelson box, Reece Pearce set himself for a shot at goal, but a last ditch challenge from Nelson centre-back Jack Brooks cleared the danger.

The final effort of the half fell to Reece Pearce, who ran onto the end of a Parkes through ball.  Pearce collected the ball midway inside the Nelson half, before hitting a low drive from the edge of the area, but his shot was well saved by the advancing Nelson keeper Steven James.

Padiham will now travel to Irlam on Saturday for their first away game of season.  Manager Steve Wilkes will be looking for his side to continue their excellent start to the season and collect another valuable three points.

Second half I thought we looked much fitter and there was only one team going to win. We made hard work of it as we missed 3 one on ones in the second half, overall I’am pleased with how we’ve started the season.”