Skipton Town Ladies welcomed Wetherby Ladies to Engine Shed Lane for the first game of the season in the League Cup. It was a youthful Skipton side that took to the field as the club continues to bring together the ladies and girls clubs.

Wetherby started the stronger of the two sides as Skipton struggled to find the passes to get them out of their own half.  The first effort of the half fell to Wetherby who took full advantage to slot the ball passed Halliday and make the score 1-0 after only five minutes.

Wetherby added a second goal on fifteen minutes following a corner from the right, which Halliday in the Skipton goal misjudged and it was headed home from three yards to make the score 2-0 to Wetherby.

Just ten minutes later, Wetherby extended their lead when a long ball was missed by the Skipton defence and the visitors added a third as the winger slotted the ball passed Town keeper Halliday to make in 3-0 to Wetherby.

Skipton then had a ten minute spell were they found their passing and created a bit of pressure on the Wetherby back four as Town’s midfielders started to control the game.

On thirty minutes, a long ball down the wing from the Skipton right back found Kirsten Spencer who outpaced the Wetherby defence and hit a shot past the keeper into the top near corner from a tight angle to make the score 3-1.

Wetherby extended their lead on forty-three minutes when a long ball over the top of the Skipton defence was met by the Wetherby forward who found the top right-hand corner with a shot from the edge of the area, to make the half-time score 4-1 to Wetherby. 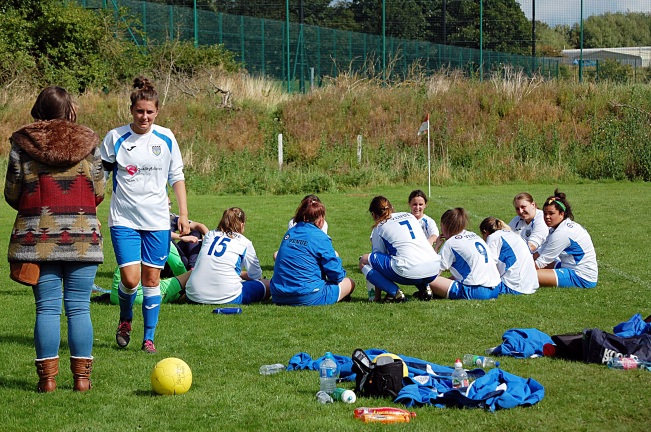 Captain Bex Holt lead the half-time team talk for Skipton Ladies but the second half started in much the same fashion as Wetherby created a number of chances and put the Skipton defence under press from three excellent corners.

Skipton halved the deficit on fifty-one minutes following an excellent solo run by Jessica Wootton, who collected the ball on the halfway line before outpacing the Wetherby right back and cutting inside three Wetherby defenders before slotting the balls past the keeper to make the score 4-2 to Wetherby.

Wetherby took control of the game again on the hour mark and found the back of the net from a corner which was tapped in from close range to make it 5-2.  Then a minute later they added another from the edge of the area which went into the top right hand corner leaving Halliday no chance to make it 6-2 to Wetherby. 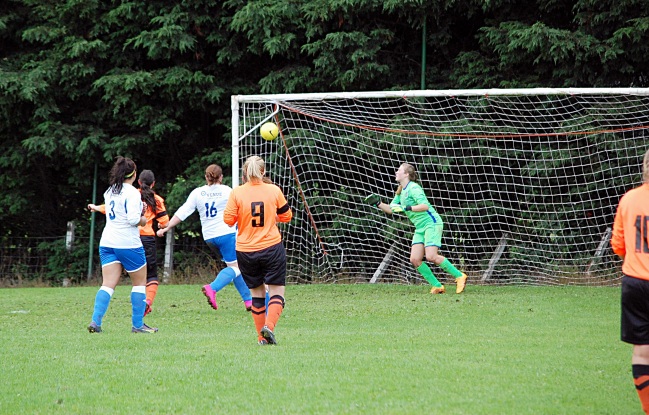 Skipton then had a brief spell as they tried to get the ball down and play through midfield this lead to an incident midway through the half.  A Skipton midfielder held the ball between her legs after a tackle and was kicked by her opponent, which turned into an off the ball incident with the players pushing each other.

Normal service moments later went a Wetherby forward collected the ball on the corner of the area and curled a shot around despairing drive from Halliday into the far left hand side of the goal to make it 7-2 to Wetherby.

Halliday was again beaten on eighty minutes with a shot from a tight angle at her near post which some how managed to get past the keeper, who was know playing on with a injury to her knee. this made the score 8-2 to Wetherby.

Skipton Town’s defence was now out on its feet and after a number of chances to the back line Wetherby rounded off the scoring in the final five minutes.  A long range effort from the edge of the area gave Halliday no chance and the goal made the final score 9-2 to Wetherby Ladies.

Despite the scoreline, young goalkeeper Lauren Halliday had an outstanding afternoon, making a number of excellent saves at the feet of the Wetherby strikers. Save of the day was a fantastic one handed tip over the crossbar that was arrowing into the top corner, without Man of Match Lauren Halliday this result would have been much worst. 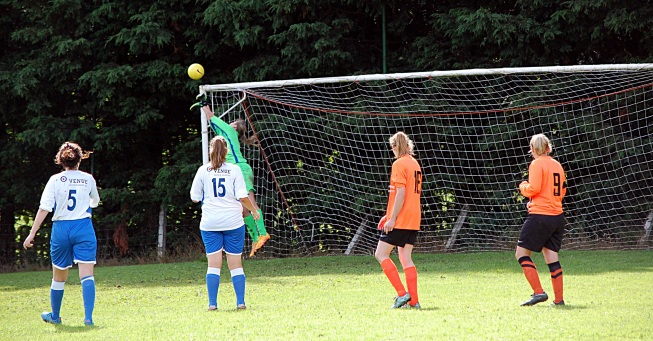