It was a familiar feeling for Adam Lockwood’s men as for the second consecutive season Guiseley AFC went into the final match knowing they would need a result to retain their Vanarama National Conference League status. 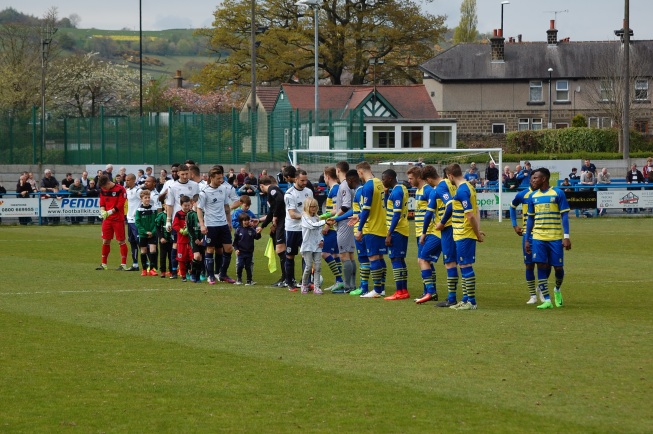 Adam Lockwood squad was down to the bear minimum as Will Hatfield, Jonny Maxted and Marcus Williams were all ruled out through injury although Jake Cassidy made a welcome return following his three match suspension.

In a nervy first half the home side were soon under pressure and when Ash Palmer conceded a dubious looking penalty it looked ominous, however, Dan Atkinson guessed right and saved the spot kick. 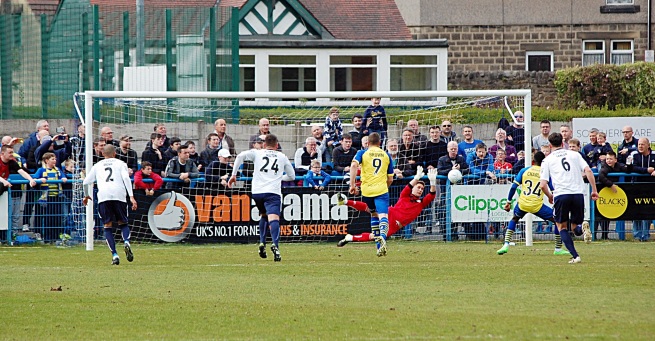 Palmer then came to his sides rescue after Amari Sterling-James had left Connor Brown for dead and drawn Atkinson for what looked like the opener before the defender’s timely intervention that cleared the danger.

Not to be denied however Solihull were awarded a free kick twenty yards out on 26 minutes which Omari Sterling-James lifted over the wall and beyond Atkinson to give the visitors a deserved lead.

In reply Kevan Hurst’s cross just evaded Michael Rankine and Derek Asamoah as the home side struggled to build any momentum clearly missing the energy of Hatfield in midfield.

Manager Adam Lockwood decided to ring the changes at halftime as Jordan Preston and Danny East replaced Palmer and Hurst from the restart which had an almost immediate impact as Rankine headed just wide from a corner.  Lowe then cleared off the line from the lively Nathan Baxter as Guiseley went for broke and replaced Rankine with Adam Boyes. 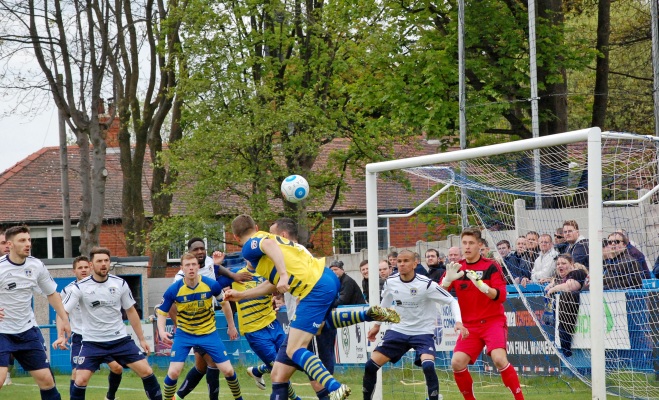 James Wesolowski’s header was just wide of the target after some good work from Derek Asamoah’s to get the cross in as the Lions finally hit their stride with twenty minutes remaining.

Solihull were not finished and as the home side pushed forward in search of an equaliser Nortei Nortley flashed a shot across goal before Regan Charles-Cook rattled the crossbar only to see Atkinson dive on the loose ball. 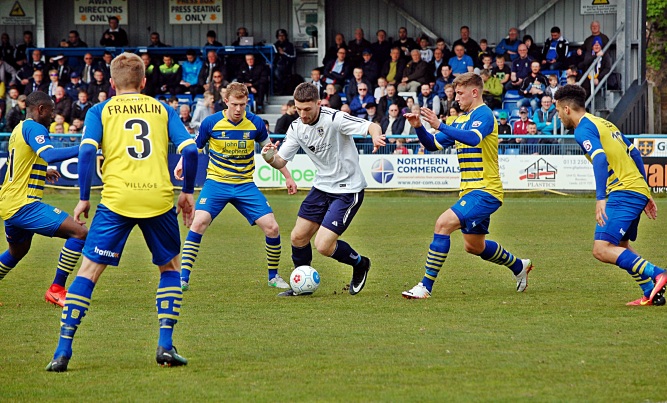 In a last throw of the dice Jake Lawlor was pushed up front and went close as he forced Danny Lewis to palm his header away to safety. The visiting custodian then saved Simon Walton’s free kick at the foot of the post and pulled off a superb one handed save to turn Jake Cassidy’s effort round the upright.

Now with their tails up Easts long ball saw Lewis and Lowe go for the ball with the Guiseley skipper converting the header to send the home support into raptures.

On ninety minutes, Guiseley AFC drew level when a free-kick was headed clear by the Solihull Moors defence, the ball was then sent back into the area from the half way line by Danny East and the ball was headed passed his own goalkeeper by Kristian Green to the full time score 1-1.

As the full time whistle sounded at Nethermor Park, the home supporters had a further tense five minutes to wait for the full time result from Bootham Crescent.  However the game finished 2-2 and York City were relegated confirming Guiseley AFC position in the Vanarama National League for next season.

The Lions can now look forward to games against FC Flyde, Leyton Orient and either Hartlepool United or Newport County in the Vanarama National League next season.