Burnley Football Club have this morning confirmed the signing of Danish international goalkeeper Anders Lindegaard on a deal until the end of the season. Lindegaard is a free agent after leaving Preston North End at the end of last season and signs after spending just over a week training with the Clarets’ squad. 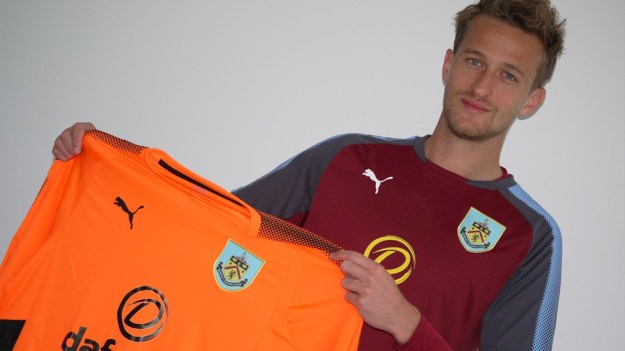 Lindegaard, will wear squad number 22 and brings the number of senior goalkeepers available to Sean Dyche back up to three, alongside Nick Pope and Adam Legzdins.  A former Goalkeeper of the Year with clubs in Norway and his native Denmark, he spent five seasons at Old Trafford, earning a Premier League winners’ medal in 2012/13 in Sir Alex Ferguson’s final season in charge of United.

He then moved to West Bromwich Albion in August 2015 and joined Preston, initially on loan in January 2016, he spent eighteen months at Deepdale before moving across Lancashire to Turf Moor.

Speaking about signing for the Clarets Anders Lindegaard said, “I’ve had a good week here and I’ve had a very good impression of the whole club and all the people here. It’s not hard to fit in nicely here.  It seems like an honest place and a very hard-working place and I appreciate being a part of it.

I have seen the first two games Nick has played and he’s done very well, I have a lot of respect for that.  I am here to try and sharpen up the competition in the goalkeepers’ department and we’ll see what happens down the line.

I feel good physically and I still want to play, I come here with a good spirit and I have a lot of enthusiasm for getting started.  I sensed from the first day I came in there was a good atmosphere, that things are in a good place, and it has paid off with a good start to the season.”