North East Counties League leaders Knaresborough Town arrived at the Mitton Stadium this weekend for a top of the table clash with Eccleshill United. The visitors went into the game eleven points clear of the Eagles and just two places above them in the table.

Knaresborough started the stronger of the two sides and with the very first attack of the game sent a low cross into the Eccleshill box only to see Benjamin Cohen go down under a challenge in the area, however the referee waved away the appeal to let play continue.

Eccleshill United should have taken the lead on eleven minutes, as Blaine Hobson was adjudged to have tripped Anthony Brown in the area. Dan Atkinson dived to his left to save a fairly weak penalty kick from Luke Harrop to leave the score 0-0.

The visitors than had a Benjamin Cohen goal disallowed for offside after the ball was parried by Dominic Smith into Cohen’s path following an excellent shot by Hobson.

On twenty-three minutes, Knaresborough Town took the lead following an excellent cross to the back post which was met by Will Lenehan who tapped the ball home from three yards to give the visitors a 1-0 lead.

Just ten minutes later the visitors doubled their lead as another Benjamin Cohen corner, this time from the right-hand side was only partially cleared and Brad Walker was able to fire home the loose ball to give the visitors a 2-0 lead.

After conceding a second goal, the home side seemed to spring into life just five minutes before half-time when they pulled a goal back following a poor clearance, Chris Lever was able to loop a header over goalkeeper Atkinson and into the net to make it 2-1.

Four minutes later, following some excellent pressure Greg Kidd lost the ball in midfield, the ball broke to the left and was swept back across the area where Lever fired home an outstanding world class shot into the top corner to make the half time score 2-2.

Eccleshill controlled the whole of the second half as they continued to press the visitors, the Eagles went in front on fifty-seven minutes as Andy Cooper cut in from the right and hit a low shot which surprised the defence and crept home at the near post.

Then just a couple of minutes later the home side extended their lead as Hardy’s shot against the bar, the ball bounced on the line and Lever was first to react and knock the ball home from close range to make the score 4-2. 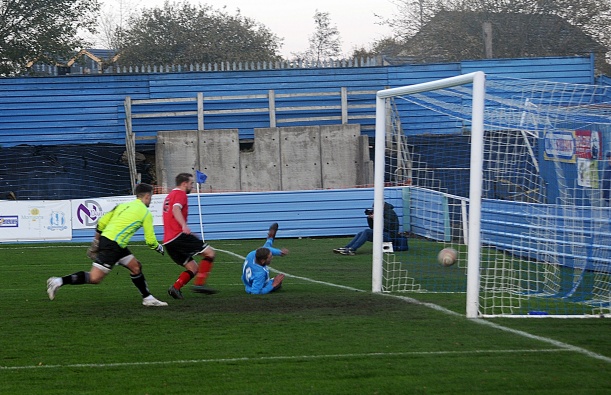 On sixty-eight minutes, Eccleshill managed to put the icing on the cake when a defensive mishap saw the Knaresborough goalkeeper caught in no man’s land with the ball in the air.  Anthony Brown was second favourite to win the ball but somehow managed to beat the keeper in a race to the ball and headed it over the shot-stopper into an empty net to make the score 5-2.

In the final fifteen minutes both sides had chances to add to the scoreline, the first effort fell to Steve Bromley who headed over for Town with Dominic Smith well beaten.  The visitors second effort fell to Benjamin Cohen who shot just wide of Smith’s right post.

Anthony Brown had two efforts for the home side his first shot was well saved by the legs of the Knaresborough goalkeeper Atkinson, before the big striker head over the visitors crossbar in the final minutes.