Clarets manager Sean Dyche has selected the same squad that beat Watford last weekend as the club look to take another three points against Stoke City at Turf Moor, a win would see the Clarets move into a Champions League place in the Premier League.

In awful conditions at Turf Moor, it was the visitors who had the first two efforts on goal the first came on three minutes when Mame Diouf found Xherdan Shaqiri, but his left footed shot from outside the box was well saved by Nick Pope in the Clarets goal.  The second effort fell to Kurt Zouma on six minutes, but his shot was saved by Nick Pope low down to his left.

On twenty minutes, Mame Biram Diouf should have given the visitors the lead when he headed an excellent Sobhi cross from the centre of the area wide of Nick Pope’s left-hand post. A few minutes late Diouf had another chance but his right-footed shot was well blocked by Kevin long.

Burnley’s first attempt of the game came on thirty-three minutes when a Gudmundsson found James Tarkowski with an excellent cross but the defenders header was blocked by the visitors defence.  Just two minutes later Steven Defour had a right-footed attempt which was also well blocked by Ryan Shawcross.

On thirty-nine minutes, the Clarets came close to opening the score when Johann Berg Gudmundsson hit a left footed shot from the right side of the box which went very close, but went over the top left corner of the goal to make the half-time score 0-0.

Stoke City started the second half the stronger of the two sides and again had the first attempt of the half when Mame Biram Diouf hit a right-footed shot from more than 35 yards which was saved by Nick Pope. 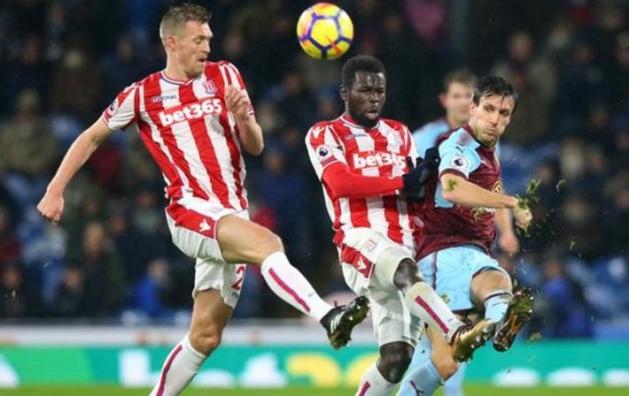 City continued to press and had another chance following a headed pass by Peter Crouch which found Xherdan Shaqiri and his right-footed shot from outside the box was saved in the centre of the goal by Nick Pope.

On seventy-one minutes, Johann Berg Gudmundsson hit a left footed shot from the left side of the box which went high and wide of Butland’s goal.  Shortly after this chance Burnley made two substitutions bring on Sam Vokes and Ashley Barnes for Wood and Hendricks whilst changing to a 4-4-2 formation.

On eighty-nine minutes, the Clarets finally took the lead when substitute Ashley Barnes played a one-two with Scot Arfield before firing the ball past Jack Butland in the Stoke City goal from inside the area to make the final score 1-0, to push the Clarets into fourth in the Premier League and into a Champions League place. 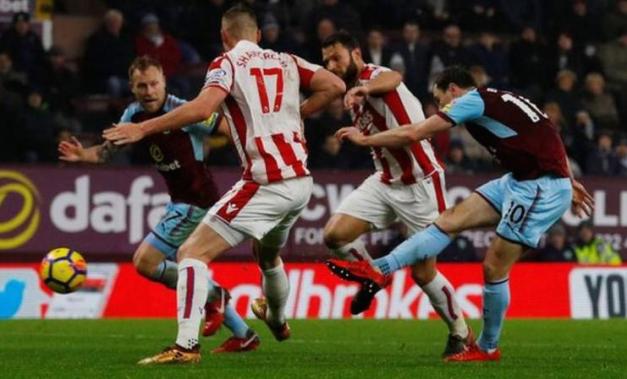 Speaking after the match manager Sean Dyche said, “We’re having a real go at what we can achieve this season. I’m not being negative I’m a realist, there’s a lot of challenges coming our way. The fans and the town have got to enjoy these times.

A lot of psychology goes into some of our planning, I want the players to know that they can grow here and develop as players whilst getting results. We are moving forward each season.”