Guiseley AFC have this morning confirmed that two more players have left the football club on loan until the end of the season.  Defender Rob Atkinson has joined his old boss Mark Bower at Bradford Park Avenue, whilst striker Mike Fondop has joined Yorkshire and Vanarama National League rivals FC Halifax Town.

Centre-back Atkinson, has not played for the Lions since he was injured at Maidstone United back in October, the former Barnsley and Accrington Stanley defender has made 78 appearances for Guiseley since joining in 2015. 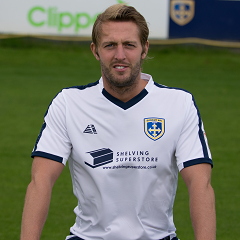 Striker Mike Fondop has found it difficult to hold down a regular starting place for the Lions since joining from Oxford City in October, he did make a number of starts under Paul Cox but has been out of the squad of late and a loan spell at FC Halifax Town may give him re-start his goalscoring touch.