The castle and town of Warkworth occupy a naturally fortified site in a loop of the river Coquet, less than a mile from the Northumberland coast. The castle developed around two main elements, a high artificial mound or motte and a fortified enclosure or bailey, there is also a hermitage for a priest lies nearby in the surrounding park.

The great tower, which stands on top of the motte, was commissioned by Henry Percy after he was made 1st Earl of Northumberland in 1377. It’s in the shape of a Greek cross with four polygonal wings radiating from a central block with a raised viewing tower.

A brilliant piece of three-dimensional design that incorporates different sizes and heights of chamber, all interconnected by an ingenious system of wall stairs. In many ways the great tower has characteristic of the architectural tradition of north-east of England and bears comparison with several late 14th-century buildings in this region. 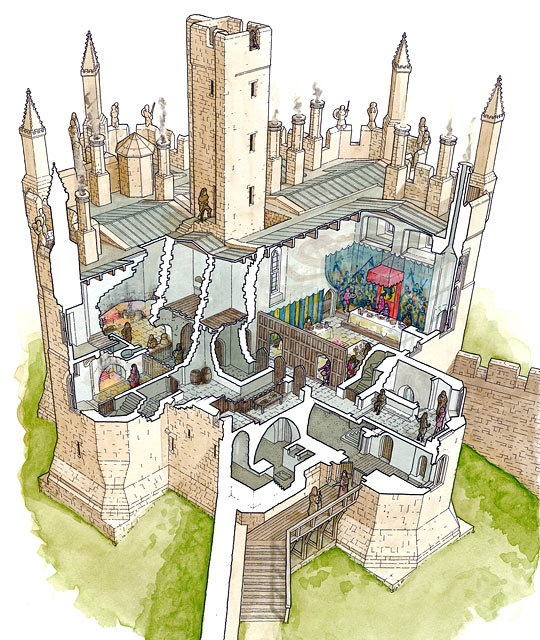 On all three storeys the rooms are arranged around a central open light well. The varying size and ornament of the external windows indicate the importance of the rooms they light. Around the entrance hall on the ground floor is a warren of vaulted service and storage chambers. These were connected directly by narrow stairs to the first-floor rooms, including the buttery, kitchen, great hall, great chamber and chapel.

Fireplaces and wall sockets indicate the level of the second-floor upper chambers. In the 1850s the renowned architect Anthony Salvin reroofed one corner of the tower to create two furnished chambers on the second floor, now known as the Duke’s Rooms.

To the north of the castle occupying the loop of the river is the town of Warkworth, few places in England preserve so strong a sense of their medieval layout. The town still has an old medieval bridge that was closed in 1965 which runs into the current main road through Warkworth.