Scarborough Athletic arrived at Holt House knowing that one point against Colne in the Evo-Stik North league game would be enough to give the club promotion to the Evo-Stik Premier League next season. Colne also need all three points in order to keep their hopes a live of reach this season’s Evo-Stik North Play-Offs.

For the neutral spectator this game had everything you would want in a football match with some excellent end to end football, fair but strong challenges, great atmosphere and if you are a Scarborough fan celebrating winning promotion at the end of the match.

Colne had two excellent chances to take the lead in the opening five minutes of the game, the first effort fell to left-back Lee Pugh who arrive in the box to get his head onto a deep cross, but his header was well saved by Taylor in the Scarborough goal. The second effort was a volley from the edge of the area which took a deflection and went just wide of Taylor’s right-hand post for a corner.

The second effort was a volley from the edge of the area which took a deflection and went just wide of Taylor’s right-hand post for a corner. On six minutes, the home side took the lead when Alex Curran’s hard driven cross was deflected into his own goal by defender Bailey Gooda to make it 1-0 to Colne. 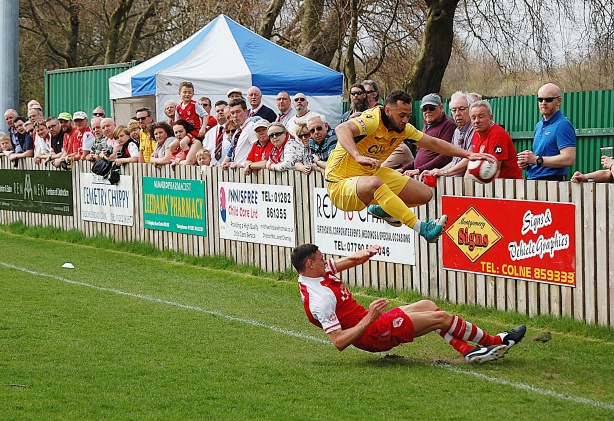 After conceding the opening goal, the visitors started to increase the pressure on the Colne defence which lead to a few last ditch challenges. The home side gave away a free-kick on the edge of the area which tested Burton before the pressure told on fifteen minutes.

The visitors drew level, as deep cross into the Colne area was heading out of the penalty area onto the right wing, when Max Wright was sent sprawling to the floor by defender Pugh. The referee awarded a soft penalty and James Walshaw sent the spot-kick into the bottom left hand corner to make the score 1-1.

Colne pressed forward looking to restore their lead and Bradley Knox shot just wide from 20 yards in a good attack. Alex Curran made a good run through the centre of the visitors defence and was brought down on the edge of the area but appeals were waved aside by the referee.

In a series of promising attacks, Lee Pugh provided a number of crosses into the Scarborough area, one of which was met by Jonathan Hodgkinson’s but his header flew just wide of the far post as the scores remained level at half time.

Just eight minutes into the second half, a good move down the left saw Dave Merris cross for Walshaw to angle a header at goal from twelve yards.  It beat the dive Hakan Burton but pinged down off the crossbar with Max Wright following up to slide the ball into an empty net before celebrating in front of the delirious Scarborough fans.

Despite falling behind for the first time in the game Colne found another gear, Gary Stopforth was unlucky to see his effort across goal take a deflection that flashed the wrong side of Taylor’s post.  The Colne players descended on the 6-yard box for the resulting corner, but they were unable to get a meaningful touch and keeper Taylor gratefully receiving the ball.

As the minutes crept on it looked like Scarborough could be set for a tense finish, James Walshaw got the promotion party started as he added a third, Coulson played a brilliant ball round the corner that released Walshaw in on goal and with only the keeper to beat the striker chipped the ball over the keeper Hakan Burton to make it 3-1 to the visitors. 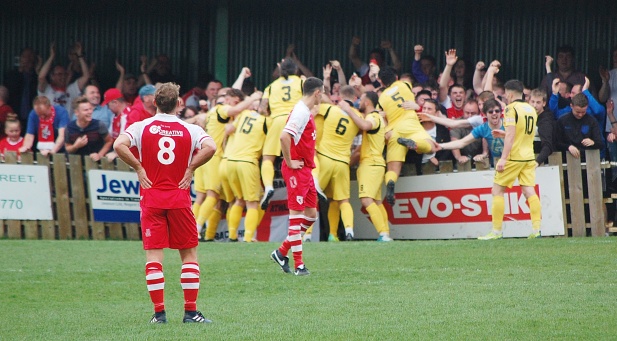 In the final five minutes Alex Curran forced a terrific flying save from Tommy Taylor but the third goal settled the game as a contest and the away fans started a countdown to the final whistle, nearly toppling a wooden fence around the pitch following the third goal.

At the final whistle, there was an outpouring of joy, emotion and celebration as players, management, officials and supporters of Scarborough Athletic all came together to mark their promotion to the Evo-Stik Premier League.

Speaking after the match Scarborough Athletic manager Steve Kittrick said, “We want to finish second in the final league table and we will be looking for maximum points from the remaining home fixtures against Glossop North End and Ossett Albion. But it was a day to savour, a moment to reflect and a memory to preserve for the supporters of the club as the Seadogs prepare to take another step up the footballing ladder next season.