Runcorn Town arrived at the Ruby Civil Arena for the North West Counties Premier League season opener.  It was a perfect setting with glorious sunshine and a pre match treat of an excellent cricket match from neighbours Padiham Cricket Club.

The visitors made the perfect start to the game when in the 2nd minute a free kick from Liam Turner was floated into the penalty area, where Simon Thelwell laid the ball into the path of Jack Sheppard who picked his spot from 10 yards to give the visitors a 1-0 lead.

Padiham came to life after the goal and responded with a right wing cross from the Adam Jones, who found Stephen Hall unmarked in the area, but his header hit the post and went out for a goal kick. The Storks continued to press and following some excellent play from Jack Tinning in midfield he found Stephen Hall who’s shot blocked by Jack Sheppard. 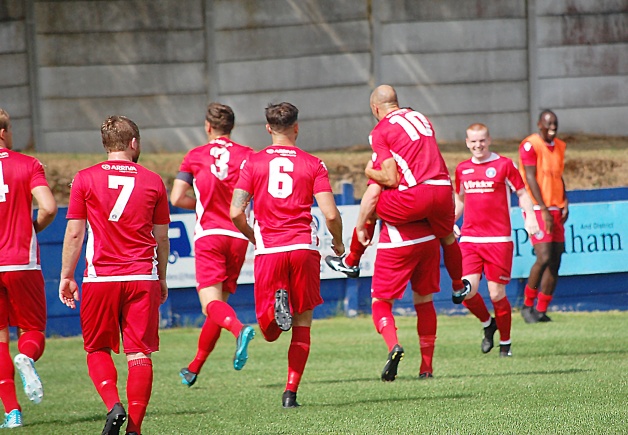 Runcorn extended their lead on seventeen minutes when they were awarded a free kick just inside the Padiham half, there seemed little danger until Steve Lewis unleashed a shot that flew over Padiham keeper Jordan Gidley into the goal to make it 2-0 to the visitors.

The second goal was a welcome boost to the visitors as Padiham up to this point had pressed hard for an equaliser. Runcorn however seized the initiative and from a corner a tremendous goal bound volley from John Shaw hit a defender before going to safety.

Runcorn maintained the pressure and duly increased their lead on thirty-two minutes, when Simon Thelwell curled a perfect shot into the far top corner of the net to give Gidley in the Padiham goal no chance and leave the half-time score 3-0 to Runcorn

The visitors started the second-half much the same as they finished the first when a poor clearance fell to Paul McManus, he immediately volleyed the ball over the defence from forty yards into an empty goal only to see offside flag go up and disallow the goal. 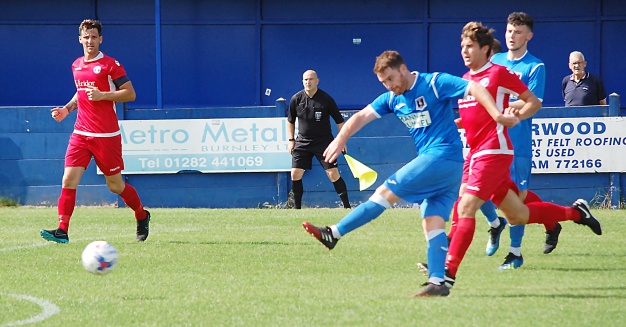 Padiham again responded well and some neat play from Tom Hulme bought a fierce low shot that Adam Reid did well to save at the foot of his post.  Just minutes later Sam Holt tried his luck from the edge of the area, but his shot went wide of Adam Reid’s right-hand post and out for a goal-kick.

The game was over as a contest on the hour mark as Jamie Menagh added a fourth goal for the visitors, collecting the ball twenty-five yards out and hitting a powerful curling shot in to the bottom corner, leaving Gidley no chance in the Padiham goal. 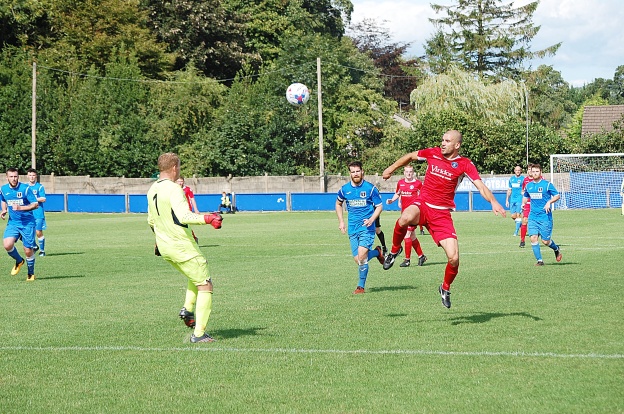 Just two minutes later, the visitors extended their lead again as Shaun Weaver created an opening for himself, before cleverly lobbed the ball over the Padiham goalkeeper and then firing the ball past the defender on the line to make it 5-0.

Padiham to their credit never gave up and hit back immediately through Steve Hall who fired a shot past Adam Reid in the visitors goal on sixty-four minutes to make it 1-5.  The home side continued to press and following a run from Jack Tinning his cross was fired narrowly wide by Sam Holt.

The home side scored the final goal of the match, when Jack Tinning made an excellent run down the left-wing before cutting into the area and pulling the ball back for James Dean to side foot the ball home and make the final score 2-5 to Runcorn Town.