The Tampa Bay Rowdies will welcome Martin Paterson back to St. Petersburg in a new role as an assistant coach, Rowdies Head Coach Neill Collins announced Friday. Paterson played for the Rowdies in 2017 and became a fan favorite for the intensity and passion with which he plays. That passion will now be taught to the Rowdies from Paterson’s new platform on the coaching staff. 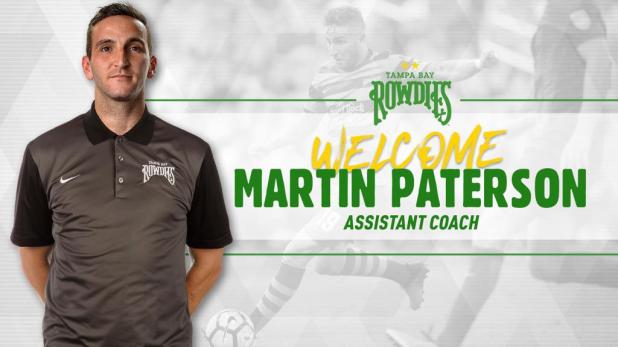 Paterson scored nine goals in his lone season playing for the Rowdies. The majority of his playing career was spent in the United Kingdom, where he represented clubs including Stoke City, Burnley and Huddersfield Town, among others.  He made 23 appearance the Northern Ireland national team.

Speaking about the new assistant manager Neill Collins said, “Martin is a big addition to our team, which includes assistant coaches Joe Cole, Stuart Dobson and Cheyne Roberts, just like we’ve been signing players to make us better, we’re now bringing in Martin to make us better. This could be one of our biggest signings, he has passion for the club and he’s going to be a top, top coach. We both share the same beliefs and I know our players will enjoy working with him.  If a bit of his intensity and will to win rubs off on the team that would be great.”

Paterson is currently en route to Charleston to meet up with the Rowdies and take his place on the bench for Saturday nights game against the Battery.