The Norman knight Odo de Barri was granted the lands of Manorbier, Penally and Begelly in gratitude for his military help in conquering Pembrokeshire after 1003. Two of his sons acquired larger estates in Ireland, which became the main power base of the de Barris, known as the Barris of Olethan.  His fourth son was Gerald de Barri commonly known as Gerald of Wales (the great twelfth century scholar) who was born at the Manorbier castle and renowned today for his chronicles and descriptions of life in his time.

Manorbier Castle is located in Pembrokeshire and rests in the lovely Welsh countryside, in fact the castle and its surrounding lands are nestled in a narrow valley carved from two streams which flow past sandy beaches to Manorbier Bay.  On the opposite ridge is the interesting Church of St. James, vitally active during the Norman times when the castle was established.

While much of Manorbier Castle’s superb state of preservation can be attributed to the efforts of J.R. Cobb, it’s fairly uneventful history also ensured its safekeeping. Unlike many Welsh strongholds, it remained relatively unscathed during its lengthy lifetime. In fact, the castle saw only two fairly minor assaults, the first in 1327 when Richard de Barri stormed Manorbier to claim what was rightfully his and the second in 1645 during the English Civil War, when the castle was seized by Cromwell’s Roundheads.

Although the upper floor no longer exists, an elaborate fireplace with lampstands, window seats and an outside latrine indicate that comfort was indeed a major factor. Erected in the 1140’s, the great hall is very possibly the earliest stone building surviving at any castle in west Wales, a huge fireplace juts out into the main section of the room with elegant carvings, a massive cylindrical chimney and an oven in the rear wall.

The hall’s battlements and unusually thick walls gave the revellers inside extra protection in time of attack and made this the most likely place of retreat when an invasion was imminent. One very curious feature of the hall is the presence of a dovecote, not visible from the interior walling but facing into the inner ward. These roosting holes may have provided homes for the winter food supply, but more likely housed homing pigeons.

The castle has been used as a film location for “The Lion the Witch and the Wardrobe” and also “I Capture the Castle” when the moat had to be filled with spring water for filming.  In more recently times Penelope Keith has filmed an episode of her popular Channel Four series “Hidden Villages.” which also featured Manorbier Castle. 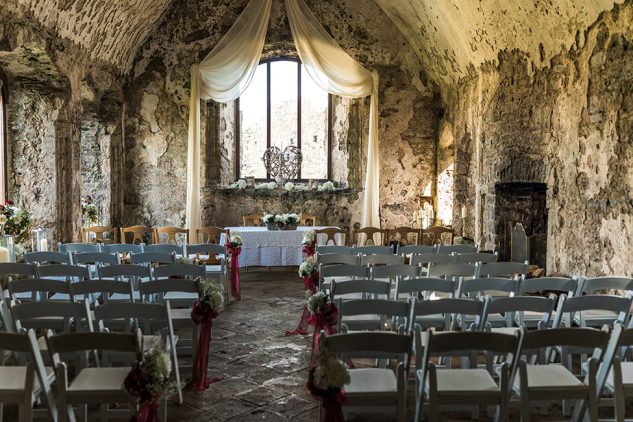 Manorbier Castle is now privately owned by Lady Dunsany and is open to the public to visit this historic site.  Like most historic sites there is a requirement to generate extra revenue and Manorbier Castle can now be hired as a wedding venue as well as having a cottage for holiday lets within the castle grounds.