The first-half was a fairly even affair with the visitors having slightly more possession and efforts on goal than Skipton Town.  However the home side competed well against the visitors who currently play in a higher division, despite this Skipton created a number of excellent chances on the break in the first-half.

On fifteen minutes, the visitors should have taken the lead following an excellent move down the right-wing, the ball fell to Natasha Mulligan on the edge of the area and her first time shot was arrowing into the bottom left-hand corner, until Georgia Midgley made an outstanding one-handed save at full stretch to turn the ball around the post.

The visitors again went close on twenty-four minutes, when a long ball over the Skipton defence fell to Holdsworth, but the strikers effort was well saved by Midgley who turned the shot around the post for another corner.

Silsden Ladies took the lead from the resulting corner, when the ball was played into the Skipton Town area, but before it could be cleared Natasha Mulligan tapped the ball home passed Georgia Midgley into the net to make the score 1-0 to the visitors.

The home side continued to press and on the half hour caught Silsden Ladies on the break with some excellent passing through the midfield, but the final shot from Jess Wootton didn’t trouble Thurling in the visitors goal as the shot went over the crossbar.

On forty minutes, the referee failed to award the visitors a clear penalty as striker Rachel Holdsworth managed to get between Georgia Midgley and Sam Pickard only for Pickard to stick out a leg and trip Holdsworth before she could tap the ball into the empty net.

The second-half started much the same as the first with both teams looking to push forward and create chances, the home side seamed to have more fight in this half with some strong tackles in midfield by Bex Holt and great forward runs from Jess Wootton.

The match turned into a bit more of a midfield battle with the home side controlling the ball with some excellent passing, which created a number of opportunities for the strikers but they couldn’t finish in front of goal.

The visitors, had two chances around the hour mark, the first effort was well saved by Georgia Midgley who tipped the ball over the crossbar.  The second effort came from a long ball over the Skipton defence and keeper Midgley blocked at the feet of the Silsden centre-forward. 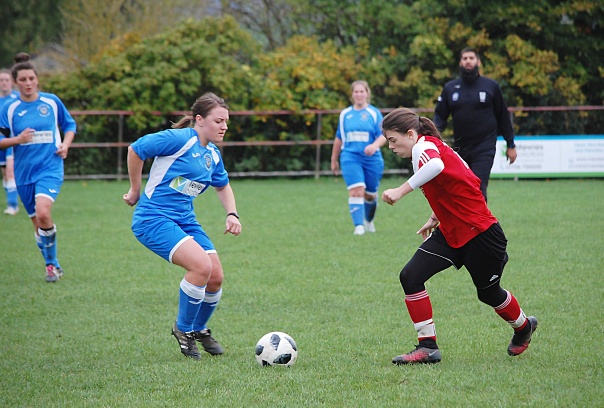 Substitute Louise Forster came on after seventy minutes and made a massive impact with some excellent forward runs from midfield. Skipton should have drawn level on eighty-five minute, when the ball fell to Forster on the six yard box but the defender got back with a last ditch challenge leaving the final score 1-0.

Skipton Ladies will be back in league action next weekend when they travel to Leeds to face Republica Internationale Ladies in the West Riding County League First Division.