Phil Neville arrived for his first press conference as England Women’s manager just over one year ago, it was his first ever managerial role and a packed press room was there to greet the former England and Manchester United defender. The journalists there that day were all there to ask Neville some tough questions about why he had been selected as the Lionesses managers, when he had no history in the women’s game.

Since that press conference, it’s safe to say that Phil Neville has answered those people and journalists who had doubts about his experience to lead the national team.  Speaking with him you can hear the determination he has to make the Women’s England team the best in the world, he has learned lessons from his playing days and the thing that is dominating his mind at the moment is winning the 2019 FIFA Women’s World Cup.

How would you review your first twelve months as manager of the Lionesses?

I have loved every minute of it from a personal point of view and in terms of results I think we have done ok, but there is still room for improvement.  The first six months were just a whirlwind of implementing my philosophy and my values, whilst also speaking with the players about what I wanted from them in terms of commitment.

The second six months has been where I have really felt the players have taken on board some of the things that I wanted to implement. There’s a really good connection between myself, the staff and my players.  The last training camp in Qatar was probably the best one I’ve been involved in because I thought everything was coming together. If you were doing a school report for my first year in charge it would be a grade ‘B’.

How did you overcame the obstacles you faced in your first month in the role?

I think the biggest challenge was to convince everybody why I took the job. There was a lot of criticism and scepticism. I’ve predominately been in men’s football all my life so to jump into women’s football caught a lot of people by surprise. But I think within my first month I have proved my commitment.

I went to an awful lot of games and still do now of course and I met a lot of people in the Women’s Super League (WSL), women’s football, club managers and players. But you’re judged on your results and I felt the minute we beat France 4-1 in my first game, people stopped waiting for me to fail.

We beat France with the style of football that we played and all of a sudden, it changed people started to think I was a good appointment.  From then on it felt as if I could start relaxing a little bit and not have to prove to people every minute of every day that I know about women’s football. 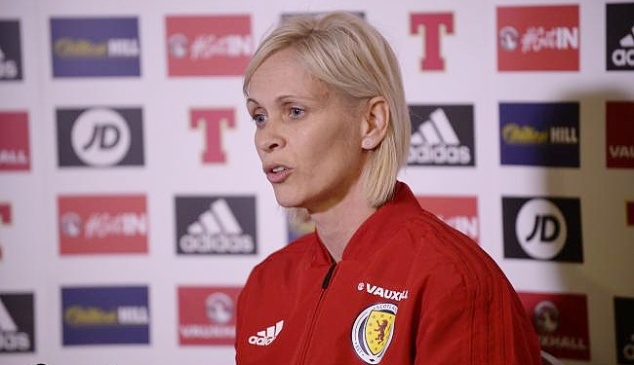 The World Cup draw placed England in Group D alongside Scotland, how are you feeling about facing Shelly Kerr in your World Cup Opener?

I think it will be an exciting group and probably one of the toughest in the competition. I’m good friends with Shelley Kerr (Scotland Manager) I have watched games with her whilst scouting opponents, she is a fantastic coach and Scotland are a good team.

If you think about the game its a five o’clock kick-off in Nice against Scotland. I wouldn’t want to be in any other place, I said to my players,  if you don’t want to play in this game you may as well go home relax and enjoy your summer.

These are the games you want to be involved in as a professional footballer. It’s a derby game with great passion and rivalry but ultimately it’s a game of football and that’s what I’ll be telling the players. If we do get involved in the emotion of the occasion, Scotland could win the game.

Scotland have got good players, who could get into the top sides in the world, they’re an ever-improving nation in terms of women’s football. They’ve got a great coach who is tactically astute and we have got to pay them the ultimate respect.

We play Japan in March will you keep your cards close to your chest?

We’ve just got to win the game, that’s the best thing for us. Win the game and put a marker on Japan, because then when we come to June and we’re playing them in the third match they’ll have that marker in their heads of what we did to them in March.  She Believes Cup is a really great dress rehearsal in terms of three games in a short space of time, three pressure games in good stadiums against the top teams. So it’s almost like a quarter or semi-final knockout phase because you’re playing the best teams in the world.

Looking ahead to France who are the favourites to lift the World Cup?

USA are the number one favourites, you’ve got to say France are number two, because they’re the host nation and playing at home. You can never rule out Germany we played them in the She Believes Cup last year and they were physically a fantastic side. So we’ve got to be at our very best, but you have to say  USA, France, Germany. It’s probably going to be the most open World Cup in terms of who’s going to win it and we are preparing to make sure we also have the best chance of winning the competition.

I’ve said that one day I would like to win the World Cup that wasn’t me being arrogant or big-headed that was the challenge I set myself and for my group of players. We came third in Canada at the last World Cup so to progress we need to reach the World Cup Final and go one better than the third place finish last time.

After that third-place finish in 2015, is it important to have players in the squad with experience of a World Cup for yourself as well as the other less experienced players?

My assistant (Bev Priestman) has been to World Cups and Olympic games, even some of the younger players that we have went to the U20 World Cup. In our recent training camp I asked who has been to a World Cup and nearly all the squad put their hand up.

The youth tournaments, they’re unbelievably vital in the progression for a younger player. They’ve suffered and they’ve been successful so there’s going to be no secrets. The biggest thing about going to these tournaments is probably not what happens on the pitch. It’s the training, the living together, what you do in your down time, the travelling. It’s forty days away from your parents, your partner, your kids, that’s the tough bit about going to a major tournament, particularly a World Cup.

Players such as Lucy Bronze, Jill Scott, Steph Houghton, Karen Carney, these are players that have been on the journey and they know what’s expected. We have to get the balance right between experience and youth.

In your playing career, like Gareth Southgate you were made a scapegoat for the exit EURO 2000.  Southgate spoke after Russia 2018 that the tournament will help people remember him differently in regard to England. Are you hoping for a similar sense of redemption come July?

I can see exactly where Gareth is coming from, I played 59 times for England, it was the pinnacle of my career and people only probably remember that tackle against Romania in Charleroi (Euro 2000).  I don’t, I moved on quickly because that’s the type of person I am.

I think when you’re talking about the England experience, there is definitely something deep inside of me that thinks there’s still unfinished business. I want to have success with England, it was the biggest disappointment of my career that with a group of absolutely incredible players that we didn’t win a Euro’s or be successful at a World Cup.

How many spaces are left in your twenty-three for France?

All twenty-three places are still available, we still have seven games before the World Cup and from day one I said the door is always open. The twenty-three will be selected on their form, fitness, how they behave and their character.

Can they go away for forty days and handle a World Cup?

Because of the open door policy, everybody has heightened the competition and the level of performance, which has left everybody feeling a little bit vulnerable and nervous which is not a bad thing. Nobody’s place is safe they’ve got to perform week in, week out.

Everybody’s equal, that’s the beauty of our squad everybody has a chance to go to the World Cup, that is how I wanted it.  It’s how it was in my career and at any given time, if you deserve to be in that team then I will select you.